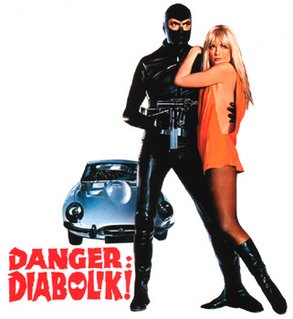 I'm saddened to report that screenwriter Tudor Gates has passed away at the age of 76. While he's much more famous for his work with Hammer on their lesbian vampire trilogy comprising The Vampire Lovers, Lust For A Vampire and Twins of Evil (the former and the latter excellent; the middle one middling), he was also responsible for Mario Bava's Danger: Diabolik. Purists will argue just how much of a spy movie Diabolik is, since the hero is actually a criminal, not a spy, but I certainly count it as one--and one of my very favorites at that. It features all of the elements of a great Sixties spy movie: a dapper hero (John Phillip Law) with a beautiful, voluptuous girlfirend (Marisa Mell), cool gadgets, fast cars (a fleet of E-Type Jaguars!), daring escapes, a teriffic, swinging score (courtesy of Ennio Morricone), an infectious title song (natch), and Thunderball's Adolfo Celi as the bad guy. All that, and Terry-Thomas, too! A great, great Sixties spy classic from a masterful director. But Gates' spy connections don't end with Diabolik!

Tim Lucas reports on his blog that Gates revealed another spy-related project to him while he was researching his forthcoming book, Mario Bava: All the Colors of the Dark (years in the making and sure to be a masterpiece when it finally comes out). Apparently Gat 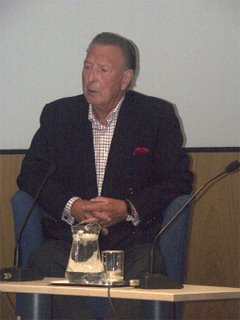 es wrote a screenplay based on an idea by Bava for a giallo called Naked You Die, which was eventually made by Antonio Margheriti. Writes Lucas: "[Gates] sent me a copy of his original script, which contained scenes not included in the English version, but which I found present in the Italian cut of the film -- notably the tongue-in-cheek ending in which a spy-crazed teenage girl (played by Sally Smith) is revealed to be the daughter of 007." Dark Sky Films claims that their forthcoming DVD of the film (due in April) is complete and uncut, so hopefully that means it will include this bit!

Gates' other spy-related work included writing for the British television series The Sentimental Agent, in which Diana Rigg made her first screen appearance and writing the The Sex Thief, a vehicle for Bond runner-up David Warbeck. (He wisely used a pseudonym for that one.) He also wrote books about screenwriting.
Posted by Tanner at 11:59 PM

Email ThisBlogThis!Share to TwitterShare to FacebookShare to Pinterest
Labels: Obituaries