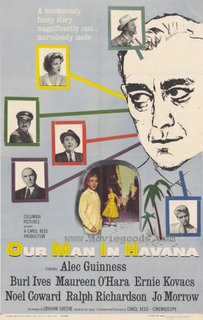 Review: Our Man In Havana

Last weekend I had the opportunity to see Carol Reed’s Our Man In Havana on the big screen, at the excellent Egyptian Theatre in Los Angeles. I’d only seen it on TV before–and even then, I missed the first half hour. Since the movie is shockingly unavailable on DVD (in America) at this time, the recent screening provides the perfect opportunity to review it.

Adapted by Graham Greene from his own novel, Our Man In Havana is a darkly comic spy masterpiece. The incomparable Alec Guinness plays Jim Wormold, a British vacuum cleaner salesman living in pre-Castro Cuba. All he wants is for his teenage daughter (Jo Morrow) to be happy, but since her tastes run rather expensive (horses, country club membership), that means spoiling her rotten. He can’t afford to spoil her on a salesman’s salary, so when Noel Coward’s ever-so-British spymaster, Hawthorne, recruits him to be MI6's man in Havana, Wormold says yes. He even gets the Secret Service to pay for his country club membership, which Hawthorne’s boss, C (Ralf Richardson), happily approves despite the exorbitant cost because that’s where he’ll meet "just the right sort of people" MI6 wants for agents. But Wormold neglects to recruit any sub-agents, resulting in a sharply worded signal from London. His friend and confidant, Dr. Hasselbacher (Burl Ives) counsels him to invent some agents, which he does. He also invents some intelligence, supposedly gathered by his fake agents.

The intelligence is close-up drawings of vacuum cleaners, re-scaled to tower above a man. Wormold says they’re installations in the mountains of Cuba, and this worries British Intelligence very much. The Prime Minister even comments that they look like giant vacuum cleaners, which sets his military advisors shuddering at the possibility of such a super-weapon. Eager to learn more, London sends a secretary (Maureen O’Hara) and a radio operator to assist their man in Havana. The "other side," meanwhile, apparently just as convinced of Wormold’s competence, sends an assassin to kill him. And on top of all this he must contend with the sleazy, corrupt captain of the Cuban police (Ernie Kovacs), who is wooing his daughter.

The lush, widescreen black and white photography and Cuban-tinged soundtrack, coupled with outstanding performances by a superb cast lend Our Man In Havana all the ingredients of a classic. So why isn’t it considered one?

Audiences at the time, particularly in America, may have been thrown by its forward-thinking genre-bending. Perhaps they didn’t want to see bodies piling up in their comedies (although Guiness, at least, was used to that after The Ladykillers and Kind Hearts and Coronets) or laugh during their thrillers. Too bad, because this film blends the two together sublimely, as evidenced during a scene in which Wormold must give a speech at a trade lunch (vacuums, not spying) where he knows one of the other attendees is trying to poison him. The scene succeeds ably as both comedy (aided by John LeMesurier as the head waiter trying desperately to keep the wrong person from getting the possibly poisoned plate) and suspense (who is the killer and will he succeed?). Although it’s certainly very funny, the comedy runs black enough that we never feel safe for Wormold, and in that way it actually adds to the suspense, rather than playing against it. Few movies manage that trick, but Reed and Greene are both at the top of their game here and pull it off masterfully.

Our Man In Havana is one of the great spy movies, and a must for Alec Guinness fans. Set your Tivos to catch it in case it airs in the middle of the night on TCM or some such network, as it sometimes does. It’s a crime that Sony hasn’t issued this on Region 1 DVD yet (if they still own the rights; it’s a Columbia film). Fortunately, there is a disc out in the UK for those of you with multi-region players.
Posted by Tanner at 2:07 AM