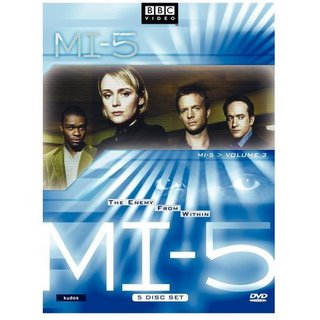 MI-5 Week continues at the Double O Section, and following up on my reviews of Seasons One and Two, here’s Season Three. Remember how I mentioned big cast changes in my series overview? Well, Season Three has plenty of them, and as a result it’s impossible to discuss it without treading into at least minor SPOILER territory. I promise to tread lightly, though!

As a number of series regulars make their exits throughout the season, a new team slowly takes over. Replacing Tom at its head is Adam Carter (Rupert Penry-Jones), seconded from MI-6. As the writers point out in some of the behind-the-scenes featurettes, Carter is a very different sort of spook than Tom. Where Tom was very cool (on the job, at least) and internalized, Adam is more human, and more external. Tom thought the job required him to be emotionless, and bottling up his feelings for the sake of his country for too long ultimately led to his downfall. Adam, on the other hand, has apparently managed a better job of balancing his personal and professional lives, largely by marrying within his profession. His wife, Fiona (Olga Sosnovska) is also an MI-6 agent, and before the season’s out she, too, will transfer to Five, making them colleagues. Ruth Evershed (Nicola Walker), who became the team’s intelligence officer in Season Two, takes on a larger role, as does bubbly new recruit Sam Buxton (Shauna Macdonald). Zoe and Danny each finally get to take center stage, and techies Malcolm and Colin get more screen time, often serving as comic relief. I can’t say I ever grew to like Adam as much as Tom, but Penry-Jones does a good job with the daunting challenge of taking over from a popular and established lead.

The season picks up where the last one left off, with Part 2 of an Aliasy tale of rogue agents and government conspiracies. Tom has been framed for an assassination, and must prove his innocence, Richard Kimble-style, without the aid of his team. (His fellow agents, in fact, seem a tad quick to believe their colleague has gone rogue!) Tim McInnerny’s Oliver Mace (seemingly a replacement for Hugh Laurie’s Jools Siveter character, subbing one former Blackadder star for another), backed by shadowy government figures, sees this as an opportunity to clean house, and quickly puts all of MI-5 under investigation. I wasn’t a huge fan of the Season 2 cliffhanger, feeling that it strayed too far from established MI-5 territory into that of Alias or 24, and the same rings true for the conclusion. Luckily, once last season’s cliffhangers are resolved, it’s all up hill from there for another terrific season.

Star Wars’ Emperor Palpatine himself, Ian McDiarmid, guest stars in one episode as a Nobel Prize winning professor who, decades ago, sold his soul to the devil (or, more accurately, to his government, as Harry happily points out, asking, "Is that such a bad thing?"), becoming a sleeper agent for MI-5. He’s horrified to learn that Five has been helping him ever since, directing his career and even putting him on the path to his Nobel. When Harry finally needs him, he "activates" him as an agent, a day McDiarmid’s Professor Roberts hoped would never come. Harry and Tom require Roberts to pretend to have invented "red mercury," a radioactive super-weapon, and market his product to terrorist organizations to pay off gambling debts. Tom runs Roberts ruthlessly, allowing the professor’s new spy life to take a heavy toll on his family life. Until Tom starts to see the parallels to his own life, and finally question what he’s doing and what he’s become, and whether noble motivations are really worth the price, as Harry believes they are. This puts him at odds with Harry once more, continuing his arc from last season. The episode serves as a nice companion piece to the Season Two episode about the drug dealer’s girlfriend, again examining the strains MI-5 puts on their agents, and the heavy price those agents must pay. MI-5 is at its best exploring these themes, and not aping American action shows like in the season premiere.

Another rather downbeat highlight of the season finds Danny assigned to protect a rare book dealer who witnessed an assassination attempt on an prominent Muslim novelist with a fatwa on him. This is a very LeCarre-esqe episode, involving betrayals and deception within England’s own intelligence community as old enemies become new friends and old friends lose their political value. It’s interesting–and sadly true, I fear–how much spying on MI-5 is merely keeping tabs on their sister service and vice versa. Throughout the series, various politicians align themselves with Five or Six or other Intelligence branches, using them to their own ends. Harry seems to hate this, but he’s not above playing the game himself, sometimes using (even blackmailing) politicians to serve his needs.

In this episode, a certain politician wants to meet secretly with Adam and pass him information that MI-6 decidedly does not want Five to possess. Adam sets out for the meeting hours early, traveling all over London and shedding various layers of clothing as he goes to lose potential tails from Six. The teams–Five under Harry, Six under Mace–watch this cat and mouse game play out on CCTV monitors, directing their pawns in the field on how to proceed. The sequence is nearly ten minutes long, and very exciting. It showcases textbook spy tradecraft (how to lose a tail, how to tail in huge teams, alternating followers at every opportunity, using cars and pedestrians, etc.) in an elaborate, suspenseful setpiece worthy of a Brian DePalma movie. I mentioned in my Season One review how adept the directors of MI-5 are at setpieces, and this sequence is another great example. There are no guns, no squealing tires, just pedestrians following each other and chess masters scrutinizing it all on TV, yet it will have you glued to your set. Great stuff.

In another episode, MI-5 takes on the controversial issue of Israeli/Palestinian relations from a seldom seen perspective. The team must do whatever it takes to prevent a dangerous, fanatical group of pro-Israeli extremists from railroading peace talks through assassination. To make matters worse, one suspected agent in the plot is Harry’s estranged daughter. This subplot leads to some very nice personal moments for Harry, a character whose private life is seldom explored. It also leads to comedy when Harry’s daughter falls hard for Danny, who’s been assigned to keep tabs on her. Needless to say, this puts Danny in a very precarious position professionally!

In my initial series overview, I mentioned that things we take for granted in James Bond movies or on 24 are given more weight on MI-5. Sure enough, Season Three devotes two entire episodes to the moral dilemmas concerning Bond and Bauer’s respective favorite pastimes: killing and torture. Fine entertainments that they are, the Bond movies (Casino Royale excepted) seldom take time to consider the human implications faced by an officer required to kill. And by Season Six, Jack Bauer has tortured so many people in so many dire situations that the act has lost all shock value, and viewers take it for granted. In these episodes, Danny finds himself suddenly ordered to assassinate in cold blood a scientist who’s selling germ warfare to the North Koreans. Trouble is, the scientist seems like a kind of decent guy, and Danny’s never killed before. Can he do it? If so, will it change him? We get another grand cinematic setpiece leading up to the killing, this time homaging Francis Ford Coppola as the prelude to violence is intercut with Ruth’s night out at an elegant chorale concert.

Adam, in the other episode, is charged with getting crucial information out of a military-trained suspect in a very limited amount of time in order to stop a guided missile attack on London. How far will he go? And how will memories of his own brutal torture years ago inform his interrogation? Will he be too lenient, or will he go too far, exorcizing his own pent-up demons on his unwitting subject? MI-5 raises the questions, but leaves it to the viewer to formulate his or her own conclusions. It’s a smart show for our times, constantly revisiting the theme of security versus liberty.

There’s a fun, clever, straight-forward Die Hard-type of story when a hacker holds Britain for ransom, turning over-the-counter medications deadly and playing hell with traffic signals. Ruth gets to take center stage in that episode, and it’s a damn good one. Another episode sees Zoe–identified publicly as "Officer X"–on trial for manslaughter. The storytelling is a bit disorienting, because it breaks with the standard MI-5 formula so dramatically, jumping around in time. The timeframe of events is never totally clear, but the mission she flashes back to would have had to have happened months prior to the court case, I would think, unless British justice is infinitely swifter than American. The story comes together in the end but not entirely satisfactorily. Gollum himself, Andy Serkis, gets to have fun as a recently-knighted rock star who seems to be a cross between Kurt Cobain and Noel Gallagher. MI-5 are out of their element when tasked to recover the kidnapped baby of the rock star, Riff, and his wife, B. ("Riff and B" are Beck and Posh type celebrity couple, beloved by tabloids and their readers.) The premise and setting make for a nice change of pace from the usual sorts of threats on the show, but it’s hardly a light and upbeat affair.

The season concludes with another powerful mini-movie. Iraqi insurgents attack on British soil, kidnapping two MI-5 regulars and threatening to kill them unless Adam helps them stage an assassination. The premise may be similar to the first season of 24, but the execution is not. This isn’t an action-packed episode, but it’s a very, very intense one, and a good conclusion to the season that’s sure to shake even the most implacable loyal viewer.

I think I’ve touched on nearly every episode in the season, something I rarely do. But they all had something interesting enough to make them worth mentioning. The whole season explored tough themes with hard-hitting storytelling. After a rocky start, MI-5 Volume 3 avoids the missteps that made Two a little uneven, and delivers a very solid batch of episodes.


I’ll continue tomorrow, with a look at the season’s ample special features....
Posted by Tanner at 12:31 AM