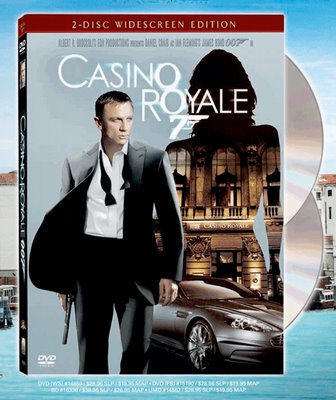 DVDActive has posted Sony's cover art for Casino Royale, due March 13 as a two-disc special edition. They've also got the artwork for a Sony trade ad, so head over there and check it out. Nope, it won't match the spines of your MGM or Fox DVDs, but that shouldn't be expected since it's from a different studio anyway! It looks pretty nice, but I wish they'd gone with the teaser poster artwork--with Craig alone at the gaming table--instead of the international hodgepodge art. (I still think it looks kind of like Bond casts a sexu female shadow, rather than a sexy female shadow looming over him!)
Posted by Tanner at 12:13 PM