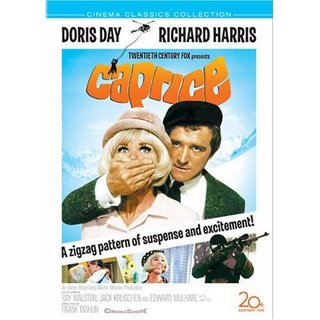 Caprice is an odd bird, because it’s both a Doris Day movie and a Sixties Spy movie. I don’t even think of those two genres (because Day was a genre unto herself) as being contemporary! And they really weren’t. Caprice was one of Day’s last movies, and the first to reinvent her wholesome Fifties/Early Sixties style as Carnaby Street-inspired mod. But despite its confused pedigree, Caprice succeeds overall as a light, fluffy, fun spy movie.

Despite the romance and comedy that come standard-issue with any Day picture, the spying is not played for laughs. There are genuine, Bondian stunt sequences, thrills, and a few killings-one kind of brutal. The obvious model for Caprice, rather than 007, is Charade, and the result is certainly a sub-Charade confection, but shares a similar mixture of intrigue, humor and romance.

Caprice is not the name of Doris Day’s character in the film, as I always assumed it was. Rather, Caprice is a cosmetic product of some sort. I think. Or, as the announcer says in the ads, Caprice is "a kicky little word that means something truly modern in motion picutres!" Okay... Or as Doris sings in the theme song, Caprice is a "whim." I guess it doesn’t really matter what Caprice is; it sounds like both a spy title and a Day title, so it serves its function. Day plays Patricia Foster, an industrial spy for rival cosmetics companies. (Yes, "companies;" she’s sort of a double agent.) That’s an interesting angle in itself, because Sixties spy films rarely focused on industrial espionage. Of course, in the end, the villain’s plot turns out to be a little more sinister than stealing the Macguffin of a water-proof hairspray.

The Cary Grant to Doris’s Audrey Hepburn is Richard Harris, as a rival agent of dubious allegiance. Despite the bad rap he tends to get for this film, Harris is quite good, in what was probably his only spy movie and his only comedy at the time. Doris herself is also good, but not the most appealing heroine. I know, I know, she was "America’s Sweetheart" and everyone loved her, but I’ve never totally bought into her mystique. Then again, I haven’t seen very many Doris Day movies. She was 43 when Caprice was made and certainly still looked great, but her character seems intended to be much younger, and the mod wardrobe reinforces this notion. That, combined with a really bad platinum wig (also mod) and orange skin (presumably the result of a bad fake tan), keeps her from being at her most appealing as a leading lady. But you can’t deny her gift for comedy.

Director Frank Tashlin came from a background in cartoons (Looney Tunes and Disney), as the commentators point out frequently, and that’s constantly in evidence. Many of the gags are timed with cartoon-like precision, and even sound effects. This style suits Doris’s talents well. In one of the featurettes, the costume designer reveals that his designs were also supposed to be cartoon-like. That makes sense, and the art direction seems to be following a similar mandate. Some of the sets are almost Modesty Blaise-like in their mod, pop art design, and colors all pop.

Many other spy tropes of the time are also intact. There are young, beautiful women in various states of undress (including a scene with lingerie models and go-go dancers posing for photo-shoots), exotic locations (France, Switzerland... California), double-crosses and triple-crosses, and exciting action sequences.

One of the best sequences, which combines comedy and suspense, finds Doris infiltrating a secretary’s giant house with a balcony in the Hollywood Hills. (The commentators say it’s Santa Monica, but it sure looks like the Hills to me. And how, exactly, did secretaries manage to afford houses in the Hills with pools and porches back then? As in this and Don’t Make Waves, among other things. Maybe that was only in the movies...) Anyway, the secretary, Su (Irene Su), sunbathes with her hair hanging over the edge of the balcony, which juts out over the cliffside. The plot calls for Doris to steal a lock of her hair (don’t ask), so she needs to climb around (rather unconvincingly) underneath the deck to get it, while a giant Great Dane tries to stop her. Other good sequences include a madcap escape from police through the apartments of crazy tenants in a high-rise, Doris thwarting Harris’ attempts to bug her conversation in Century City, and what is possibly Doris Day’s only ever fight with a shark. (Though it turns out to be more of a dolphin.)

The best sequence, however, and the one you’ll remember from this movie, is an elaborate Swiss ski chase. Day (or rather her double), in a fashionable yellow ski parka, is pursued down a mountain by a masked assassin in black with a high-powered rifle. As she nears the edge of a cliff (presaging The Spy Who Loved Me), Harris lowers himself from a low-flying helicopter in an attempt to save her. Despite the obvious rear projection when the stars themselves are spliced in, the stunt is quite impressive. There’s some exciting on-the-go ski photography quite reminiscent of On Her Majesty’s Secret Service, which came two years later. (John Cork even postulates on the commentary track that it was Willy Bogner, Jr. who shot this, too, although there is no proof of that. His backwards-skiing photography technique is clearly used, though, and it’s hard to imagine who else could have pulled it off.) This is definitely the movie’s crowning achievement, and pulled off with the skill of a seasoned action director, not a comedy man with a background in cartoons.

The film wraps up with just about everyone turning out to be something different from what they were presenting themselves as, but none of these twists are very convincing. Indeed, the plot itself doesn’t make much sense at this point, but Caprice isn’t really a "plot" kind of movie in the first place, if you know what I mean. There’s even a bit of Psycho gender-bending (don’t worry about spoilers; you’ll see it coming a mile away) which is kind of silly. But overall, Caprice is the lightest of the light, and has the feel of some of the Eurospy Bond knock-offs. It’s definitely a recommended rental for spy fans, if not a necessary part of your collection.

Extras
Fox’s new Caprice DVD is a full-blown special edition, produced by John Cork and Bruce Scivally, the men responsible for the excellent documentaries on the Bond DVDs. First, there’s a commentary by Cork and Doris Day expert Pierre Patrick. It’s got some interesting nuggets, but has a tendency to drift off topic. (Some unrelated facts you’ll pick up include the history of the Eiffel Tower and a lengthy discussion of the dangers of sodium pentathol.) Patrick even makes an inane comment at one point, saying Caprice is similar to movies like Austin Powers, Naked Gun and Pulp Fiction. (???????!) I was fascinated to learn the origins of LA’s Century City, though, which mercifully had something to do with what was going on onscreen. The commentary also serves to decipher the plot for the viewer, as the commentators helpfully tell us important details from the script that were left out of the final product. It’s certainly not a good sign that you need a commentary to tell you this sort of thing, but as I said, it’s not really a "plot" movie anyway. Overall, Cork and Patrick are a good pair for this movie, since one is a spy expert and one is a Day expert.

"The Caprice Look: A Conversation With Costume Designer Ray Aghayan" contains the aforementioned insight about the cartoon look for the movie. "Double-O Doris" nicely situates Caprice amongst the mid-Sixties spy craze, and tells how Doris Day came to make a full-fledged spy movie. I haven’t heard of any of the experts interviewed (who the hell is "Doktor Goldfinger"?), but their sound bites are well-chosen and this featurette is certainly the thing of the most interest to spy fans on the disc. Wait till after you watch the movie to see it, though, as it spoils the helicopter/ski climax.

"Doris and Marty," on the other hand, is of very little interest to spy fans, but certainly informative for someone new to Doris Day. It focuses on her career, and how it changed when her third husband, agent/producer Martin Melcher, took control of it. Poor Doris! Apparently he spent all her money ($20 million!), didn’t pay her taxes, and even sold her art collection and replaced it with imitations! And he signed her to a TV show without her knowledge before he died! This is another example of the well-produced, informative sort of documentary we’ve come to expect from Cork’s Cloverland Productions.

The radio interviews (with Day and Harris) are also well-produced. Not the standard audio over a blank screen (ala WB) or even audio over a still gallery we’ve come to expect of radio interviews on DVD, this is a well edited segment with the audio playing over stills and video (appropriately selected scenes from the film) turning the radio interviews into two more featurettes, with comments from the stars. Finally, there are several trailers, in English and Spanish, and a still gallery, which includes some nice posters in the Sixties spy tradition.

Caprice is a very impressive special edition. I’m glad Fox continues to treat its back catalog with such respect, and give us little gems like this with loads of great features.
Posted by Tanner at 8:05 PM