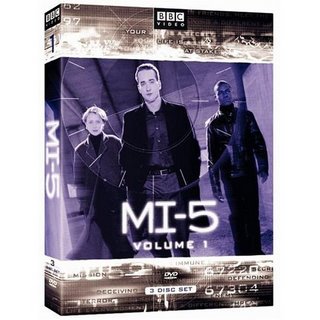 With Season 4 of BBC’s MI-5 due out on DVD in America today, it seems like a good time to take a look at that series. Known in the UK by the more evocative title "Spooks," MI-5 falls more or less into the "realistic" school of spying, closer to LeCarre and Deighton than Fleming and 24. The show focuses on the lives of several agents in Britain’s eponymous Security Service, and their missions are usually ones more of old-school spying than licensed killing like 007 or wanton torturing like Jack Bauer. (And when one of those subjects comes up, which both do in the course of the series, it presents enough of an ideological quandary that each gets a whole episode devoted to it.)

MI-5's officers, especially in the show’s early seasons, focus primarily on recruiting agents, ie "turning" people already inside or close to terrorist groups to inform on their masters. They find whatever weaknesses they can and exploit them, playing on potential agents’ fears and loyalties, and often putting them at considerable risk. To do this, the officers themselves must frequently go under cover and assume different identities, which takes its toll on their mental well-being over the course of the series. From what I’ve read, this seems to be a fairly accurate reflection of what officers of MI-5 actually do in real life, which makes the show more interesting. When there’s serious violence to be inflicted, these guys generally call in SAS or Special Branch to handle the gunplay rather than themselves strapping up and going outside to play Rambo. Yet that somehow doesn’t lessen the excitement of the action at all.

MI-5 is one of those rare fictions (like Greg Rucka’s Queen & Country or the best LeCarre) that manages to make bureaucracy exciting, and a lot of the tensest moments unfold in the political maneuvering of team leader Harry Pearce (Peter Firth). Furthermore, just because they’re not carrying Walther PPKs doesn’t mean that the officers in the field aren’t in danger. Far from it. MI-5 is a show that manages to convey a real sense of danger and generate genuine suspense over its characters’ fates. It does this largely by frequently reminding the audience that none of the characters are ever safe. Early on, horrible things happen to one main character, and lives aren’t worth any more on this show just because someone happens to have star billing. (Actually-and strangely–there’s no billing at all. There is no cast at the beginning or end of the American DVD version of MI-5, which lends further credence to the notion that every character is expendable.) Just when the viewer starts to feel safe, another lead character meets a sudden and surprising demise. Needless to say, the show has its fair share of turnover among the cast. But in the time they have, each character is well-drawn and given time to develop, so you really feel it when they do leave. I should also note that not every departure is violent. Spying, and constantly living lies, is a business conducive to burnouts and betrayals. There are other ways–disgraceful and graceful alike–that a spy can be undone and a character can leave the show.

While it’s an altogether different type of show from 24 (and couldn’t begin to compete with that on a pure adrenaline level), it’s also a better one. Any regular reader will be familiar with my gripes about 24, but I can’t help bring them up again because MI-5 manages to succeed so well in just the places 24 fails. Where 24 resorts to ridiculous soap opera scenarios to create tension in the workplace (CTU), MI-5 relies on legitimate politics–of both the office and government variety–to generate much more effective suspense. It also explores similar ground to 24, with regard to how far a government should be willing to go to prevent terrorism in the current global climate. Again, in my opinion, it succeeds better. While 24 might raise an interesting issue, it's lost all impact by the time Jack tortures his tenth person in a day. MI-5 credibly explores what effect participating in torture, or assassination, or subterfuge, or any of the other questionable-yet-sometimes-necessary methods governments use to prevent catastrophes, can have on the human beings whose job it is. Then again, 24 is primarily an action show, and generally delivers on that count, and MI-5 is primarily a drama, so perhaps the comparison is unfair. Still, if you’re looking for a program that delves more cerebrally into some of the interesting issues 24 raises, MI-5 is the show for you. It’s a smart show about the act of espionage, and the toll that takes on the personal lives of the men and women who practice it.

Seasons One and Two primarily form the arc of Tom Quinn, played with Clive Owenish stoicism by Matthew Macfadyen (Mr. Darcy from the Keira Knightly Pride & Prejudice). Tom runs the operations, under Harry who appears to run the section. (The show never makes the exact structure of the organization very clear. Like many spy shows, it boils down a giant organization that employs thousands into just a few faces. Still, what I gather is that Harry is the Director of Operations, and Tom is the head spook who runs those ops.) The spy storylines in season one are different each episode (a "threat of the week," so to speak), but Tom’s personal life (and, to a lesser extent, those of his team members) forms an ongoing, serial story. He starts out trying to keep his personal life very separate from his professional life, but the more serious he gets about his girlfriend (who has a young daughter, complicating matters), the more questions she has about where he disappears to at all hours. His private and professional lives become inexorably more intertwined, with tragic consequences.

Tom’s team consists of Danny (David Oyelowo) and Zoe (Keeley Hawes, who co-starred with Rachel Stirling, daughter of the all-time greatest TV spy, Diana Rigg, in BBC’s Tipping the Velvet). Both are excellent actors who bring a lot to their characters. While they get more to do in subsequent seasons, this pair is electrifying every time they’re on screen.

I originally watched the first episode when MI-5 debuted on A&E. I remember being put off by a guest star's atrocious American accent, and slightly confused by a kind of messy plot. While the accent is still inexcusable (but thankfully around just for the one episode), the plot makes a lot more sense on DVD. Why? Because MI-5 is a 60 minute show, cut down to a mere 45 for its A&E airings. Cutting fifteen minutes out of such a tightly-plotted spy show simply isn’t possible. Already convoluted storylines become impenetrable, and crucial character moments are lost. Watching the full British version on DVD, I felt like I was watching a different show. The pilot is fast-paced and does a good job of introducing the characters. It doesn’t feel like a pilot, but it does all the jobs a pilot needs to do, setting up the world and its people.

There’s not a bad episode in the lot for Season One. This is definitely the season to start with, and chances are you’ll be hooked by the end of its six segments. Guest stars include Buffy’s Anthony Stewart Head, Tim Piggot-Smith and Hugh Laurie, among others. Laurie steals the show in his two-episode stint. He plays a condescending MI-6 officer, who wears school ties and looks snobbishly down on his colleagues at 5 and refers to them as "the children." The character is basically a dry-run for his House character, but more fun because he delivers his withering insults in his own British accent. It’s too bad his House success ultimately kept Laurie from returning to the show.

The final episode of the first season, in which Tom’s professional life collides irrevocably with his personal one, is especially first-rate television. Over its run, MI-5 creates some tour de force set-pieces, but the most nail-biting of all has to be the cliffhanger that concludes this episode. It’s a truly Hitchcockian bit of suspense, and one of the best variations on the old "ticking clock" ploy I’ve ever seen. A word of caution: have the first disc of Season Two ready to go when you watch the conclusion on Season One!

Season One (or "Volume 1" as it's officially labelled) comes with enough bonus features to satisfy any fan. There are deleted scenes (all interesting, if not crucial, and worth watching), commentaries, featurettes and a number of lengthy cast interviews. Frankly, these interviews tend to go way off the topic of MI-5 and could have used some more judicious editing, but if you're obsessed with Jenny Agutter's early career, there's plenty here to enjoy. The menus, it should be noted, are... elaborate, to put it nicely. The first time I put Disc 1 in, I thought they were really cool, but they get old fast. Luckily, you can skip the little mini-stories the disc likes to tell every time you select something by pressing the chapter skip button on your DVD remote. The "digital" font the selections are written in is also very hard to read, making navigating the features a difficult experience. Still, problematic menus are a very minor quibble in what is, overall, a very impressive DVD package.
Posted by Tanner at 12:09 AM