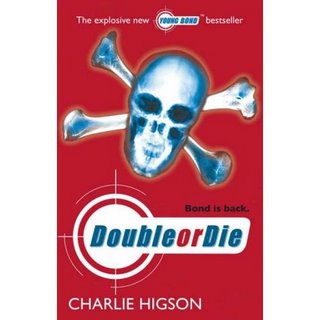 ...if you pre-ordered it from Amazon.co.uk, at least. As you probably know already if you surf the James Bond sites, Charlie Higson’s third Young Bond novel, Double Or Die, came out January 4 in England, where it debuted at #1 on the children's bestseller charts. The publishers tried to stir up further public interest by making a secret of the final title, which was voted on by readers. (The other options were the Ludlumish The Deadlock Cypher and the G.I. Joeish N.E.M.E.S.I.S.) So secret was the title revelation, in fact, that the very first batch of books were shipped in protective foil wrappers, hiding it. These foil-wrapped copies are labeled "Limited Edition," though I’m not sure quite how limited. My guess is that the entire first printing came in wrappers. And, of course, if you want your first edition to be worth anything down the line (as the first two Young Bond novels already are), then you’ll need to save the wrapper. With this in mind, I had ordered two, but I’m happy to report that that was actually unnecessary. The wrapper opens easily (if you’re careful) and proves to be resealable. So as long as you read your book gingerly and save the bag in a safe place while you do so, you needn’t waste your money on extra copies. Which is good news, because so far the book is only available in the UK (although Amazon.ca lists a January 30 Canadian release), and importing it can be kind of expensive.

The first two Young Bond novels, after coming out as paperback originals in Britain, were released as hardcovers in America by Miramax Books several months later. Miramax, however, has yet to announce a US release date for Double Or Die, or even if they will, in fact, be publishing it. (Their initial deal with Ian Fleming Publications was apparen 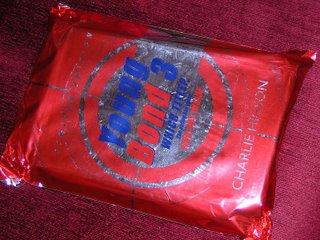 tly for only two books.) They have announced an April 1 street date for the BloodFever paperback. And it's promising that Amazon lists a June release for the "Young Bond 3" audio book, but that comes from a different publisher, and early listings on Amazon are often dubious. To my knowledge, the series hasn’t achieved the break-out success here that it has in the UK. Still, hopefully Miramax will continue to release this surprisingly good series, and it won’t suffer the same fate as IFP’s other Bond spin-off, The Moneypenny Diaries, of which neither book has yet seen US publication.
Posted by Tanner at 9:35 PM