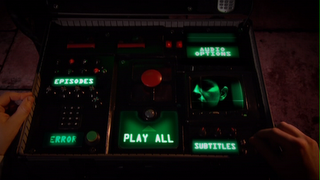 I couldn’t get to the DVD bonus material when I reviewed Season 4 a few weeks ago, so here we go...

The big disappointment is that there is far, far less bonus material on Season 4 than there has been on the previous seasons. Gone are most of the regular features, including the deleted scenes and my favorites, the individual episode documentaries. And there were plenty of episodes this season that I would have liked to delve deeper into after finishing them. In fact, discs 3 and 4 don’t have any bonus content at all, which is a first for this series. (It’s also confusing, since the still-annoying "computer screen" menus address this issue by saying "Error" where they normally say "Extras," making you think the disc’s defective. See picture above.) But the bonus material that is present at least more-or-less lives up to the generally high standards set by the previous releases.

Without the individual episode documentaries, the centerpiece of this set becomes the overall Season 4 documentary, called "Spooks 4: An Elusive Peace." It’s long, running over 35 minutes. (A lot of that, however, is taken up with lengthy clips from the series you’ve presumably just watched.) All the actors talk about why the decided to come back to the show (which certainly isn’t a given like it is with American shows) and why they like their roles. Nicola Walker (Ruth) seems to be getting more comfortable; she says it used to be the first thing actors looked for when they got the newest script was whether or not they were still alive at the end of it; now they look for juicy little character moments. Between her and Peter Firth, there’s more screen time here devoted to the relationship between Ruth and Harry than there is on the show! Hugh Simon and Rory MacGregor (Malcolm and Colin, who are also funny out of character) lament being stuck on the grid most of the time, and reveal that the technical jargon they’re required to spout is "difficult to get your mouth around." All of the actors also take us through an average day on set. We also learn that Spooks (MI-5 in the US) was nominated for a BAFTA in its 3rd season, which is apparently rare.

Unlike previous seasons that featured lots of talking heads professionally and artistically shot against plain black backgrounds, this documentary favors tandem interviews shot on the fly in outdoor locations with lots of wind noise. Having worked on such projects, I can say it must have been a bitch to edit. It mostly consists of these interviews and scenes from the show; there’s very little behind-the-scenes footage.

For that, you have to watch "The View From the Grid," which is basically a lengthy interview with director Julian Simpson, who’s frankly not very engaging, spliced in with on-set B-roll. It runs about 18 minutes.

Finally, "Ragnum Defende: An Interview With Andrew Woodhead" is just that, and he is a producer on the show. He says that since Spooks is such a visual show, it’s hard to keep directors around, because they tend to get offered bigger stuff after shooting an episode. He also says that they have the longest shoot in British television, doing all ten hours back to back. (Maybe that’s why they also have trouble keeping their actors around!) Overall, his interview is a lot more interesting to a fan of the series than Simpson’s.

And that’s it. That’s all there is. It’s certainly enough to seem generous compared to many TV shows, but we’ve been so spoiled with extras on all the other seasons of MI-5 to feel seriously let down by the bonus content here. Let’s hope the next season offers more!
Posted by Tanner at 1:50 AM