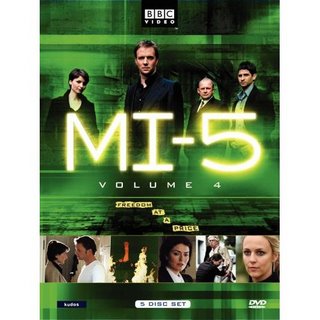 MI-5 Week concludes with Part 1 of a review of Season 4, available this week. Again, it’s impossible to write about this season in an entirely SPOILER-free context, since it’s so dependent on what’s gone before. But the basic, overall spoiler is nothing that you couldn’t tell from the front of the box: the cast has entirely changed. Don't worry, though; I wouldn’t dream of revealing WHY that’s happened! You could actually pick up the show with this season pretty easily, because the new team is really just coming together, and the characters who were introduced in Season 3 haven’t had a chance to collect a lot of baggage yet. Of course, if you did that, you’d be depriving yourself of the three excellent seasons that preceded this one, so I’d recommend starting from the beginning.

The fourth season certainly begins with a bang, which is a good idea. It hits the ground running so fast that you don’t even have time to notice that none of the main characters who started the series are still in it. And it’s a two-parter, so by the time it’s over, you’ve been through an intense experience with the new characters, and you’ve spent enough time with them that you like them. Good strategy. The two part season premiere is a bit more action-heavy than most MI-5 stories, but again, that makes it easier to adjust to the new faces. It’s basically an action movie, complete with spunky civilian heroine (Love Actually’s Martine McCutcheon) along for the ride–and in danger when the plot requires. Officers carry guns, get in physical fights, and even veer perilously close to a car chase at one point.

I began my review of MI-5 stating how different it was from 24, but the opening of Season 4 is basically a 24 clone, albeit a well executed one. The series has definitely changed its skin along with its cast. At one point, Adam Carter even dangles a terrorist over a roof to get him to tell where a bomb is, which is a very Jack Bauer maneuver. Unfortunately, along with 24's urgent action and pacing come some of its cliches. An old flame of Harry’s, Juliet (played by Anna Chancellor–"Duckface" from Four Weddings And a Funeral) enters the Grid (as they refer to the Ops room), generating sparks, and the Service is beset by a "two-episode mole," something Bauer’s CTU seems absolutely rife with. Worst of all (and decidedly unlike 24), we’re treated to the least convincing American accent since Mary Kane in the series pilot courtesy of guest star Corey Johnson. (He looks a little bit like Tony Soprano, so I guess they thought he’d make a plausible Yank.) On top of that, the actor who plays the mole chews up scenery, grinds his teeth, and if he had a mustache I swear he’d twirl it. A surprising lapse for a series that normally features such stellar actors in guest roles. (And, sure enough, there is a stellar guest performance here–Nigel Terry as a misanthropic professor with possible ties to the terrorists.) Still, the episode moves along so rapidly that these grievances only occurred to me afterwards, and the MI-5 action movie serves its purpose of acclimatizing the audience to its new starring cast.

The season that follows is not as solid as Season 3; it’s got peaks and troughs like Season 2. The problems that beset it are really problems that television shows usually face during their first seasons: finding their voice, deciding just what kind of show they want to be. Growing pains. That’s because Season 4 is so different, MI-5 is basically reinventing itself. The first two episodes were no fluke; MI-5 becomes something closer to an American action/spy series this season. There are more action scenes involving the main characters, and more moments that seem a little bit fantastical. MI-5 no longer sits back and lets Special Branch handle the gunplay; our officers get down and dirty themselves more often this season, participating in more shootouts than the whole series had up to this point. But none of this is actually a bad thing. While I personally preferred the more realistic cloak and dagger bureaucracy of the early episodes, the producers pull off the new, more action-oriented MI-5 with great aplomb. And there’s absolutely nothing wrong with a tense, action-packed spy show! (I still like the new MI-5 better than 24.)

The show still explores the same hard-hitting topics of security versus liberty, but those issues don’t always arise as organically in its retooled version as they did at first. More and more, Harry is used as a liberal mouthpiece, which is odd, considering his job. Juliet is brought in as a far-right conservative for him to clash with over ideological differences. Harry shows reservations about assassinating potential security threats (which Juliet is prepared to sanction in a heartbeat), and stands up for a wrongfully-imprisoned terror suspect, who she would just as soon toss back in prison to avoid embarrassment. It seems like only yesterday that Tom was making similar arguments against Harry! Increasingly these arguments (between Harry and Juliet) are told instead of shown, as they used to be. But that doesn’t mean the series can’t still show them brilliantly, from time to time. Episode 3 is probably their most successful take yet on the subject of covert agencies in democratic societies.

When a local political body is taken over by the British Way, a neo-fascist party, they establish a "whites first" policy in the estates (Britain’s version of projects) and mobs begin chasing immigrants out of their homes before the legitimacy of the law can even be addressed. William Sampson (Rupert Graves, from V For Vendetta), a popular member of parliament, takes advantage of the situation to resign and stand for re-election as a member of the British Way party, and attempts to sway other MPs in the same direction. MI-5 take it upon themselves to destroy the candidate’s credibility, ruin his campaign and turn the party against itself. It’s against everything democracies stand for, but for the right cause. The characters themselves are fully aware of this, and openly question what they’re doing. I have no illusions that this very thing hasn’t been done in real life, by MI-5 and the FBI, and in all likelihood for much less noble causes in some cases. The officers pull off a perfect, realistic intelligence operation, and it’s both fun to watch and thought-provoking at the same time. In other words, it’s MI-5 at its best.

The less credible, more action-heavy episodes are also lots of fun to watch. Whereas in the first season the rivalry between MI-5 and MI-6 played out in witty, condescending banter between Hugh Laurie and Peter Firth, now (indicative of the transformation the series has made as a whole) it plays out in bullets. Episode 5 actually manages to contrive a shootout between officers of the two services in a London apartment. And it’s a great shootout, shot moodily in a dark apartment, lit up, strobe-like, in staccato bursts of bluish gunfire. That episode also features a plucky civilian heroine, Jo, which is starting to become a trend, but the character is so well played (by Miranda Raison) and so plausibly written that it doesn’t seem out of place. (In fact, she’s recruited by Adam in the next episode to become a part of the team, and a series regular.)
What doesn’t work as well is an episode focusing on Adam and Fiona’s dangerous past. When old enemies return to haunt them, and her presumed-dead ex-husband reappears, it seems overly soap opera-ish, and out of character for the series. Technically, the episode is just as impressive as the rest, with the same great setpieces (although it’s largely told via flashbacks, like the Zoe on trial episode from Season 3), but the plot pushes credibility.

As far as the new leads go, Olga Sosnovska is likeable as Fiona, but her character still isn’t as interesting as Zoe. Raza Jaffery does a good job as Zaf, a charming young spook whose sense of humor sets him apart, and makes him a good foil for the more serious Adam. But Zaf doesn’t get any truly meaty episodes this season, and one feels that the character’s best moments are ahead of him. When Zaf and Jo discuss moving in together as flatmates, it seems like the producers are trying too hard to duplicate Zoe and Danny’s relationship. Hopefully, they’ll end up going in a more original direction with this plot line. Finally, perky Sam Buxton has disappeared entirely this season without an explanation, unless I missed something! Most characters who leave the show get rather grand exits, but not Sam. It makes sense that her character might have left MI-5 after the events of last season, but that’s never explained. I want to know what happened to Sam!

Overall, MI-5 Season 4 is a great, glossy spy show, but I can’t recommend it as enthusiastically as the previous seasons. As nobly as they try to acclimatize viewers to the new cast, I don’t yet respond to any of these characters as much as I did to Tom, Danny and Zoe. And I preferred the original, lower-key take on espionage to the 24-influenced, action-heavy style the show has adopted along with its new leads. Perhaps coming in fresh to this season that wouldn’t be an issue, but watching them in order I can’t help considering it. Still, I’m very much looking forward to future seasons, and eagerly awaiting the resolution of the season-ending cliffhanger! Regardless of how one season compares to what’s come before it, MI-5 remains at the forefront of the current crop of spy shows.

I’ll be back at a later date to review the extras on the MI-5 Volume 4 DVDs.
Posted by Tanner at 7:06 PM