Book Review: The Devil In Amber by Mark Gatiss 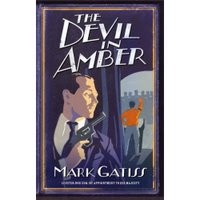 Review: The Devil In Amber

Mark Gatiss’s follow-up to his excellent spy debut The Vesuvius Club has been out for a while now in Britain, and just hit American stores this week. While The Vesuvius Club was a whole lot of fun, it ultimately lived up to its subtitle by being "A Bit of Fluff," just as it claimed. I loved every minute of reading it, but come the final chapter, I just wanted something more, and I wasn’t sure what. Gatiss did an excellent job of going through all the motions of a turn-of-the-century thriller, right down to the obligatory evil Chinaman, but that wasn’t quite enough. It was a dead-on pastiche, and I couldn’t fault it for that, but coming from one of the co-founders of The League of Gentlemen, I expected some sort of twist on the genre. (Well, some twist beyond the hero being bisexual, which I guess would have been quite a shock to Edwardian readers, but, coming from Gatiss, I pretty much expected.) In The Devil In Amber, Gatiss finds that missing ingredient and then some.

Gatiss once outlined his plan for a Lucifer Box trilogy (Box being the hero of Vesuvius and Amber). The first book was to be his take on Sherlock Holmes and Victorian/Edwardian adventure, the second was to be his 1920s/30s John Buchan-style thriller, and the third (forthcoming) to be Gatiss’s version of Ian Fleming, set in the early Fifties. Rather than doing a straightforward 39 Steps-style story, though, Gatiss has stepped outside the box, so to speak, and outside of the strict borders of the spy genre. Lucifer Box is very much still a secret agent "by appointment to His Majesty," but his struggle against would-be Facist dictator Olympus Mons in The Devil In Amber takes him into the realm of the supernatural. Mons’s objective? To summon the Devil himself, in the flesh. As, of course, a means to rule the world. (Note to would-be dictators: such plans rarely work out as you expect.)

Gatiss’s influences clearly extend beyond the obvious Doyle/Buchan/Fleming origins (all still very present) and into Hammer movies and their sources. (The League of Gentlemen also had homages aplenty to Hammer and Amicus, particularly in their Christmas Special.) Most obviously, he draws from two Christopher Lee movies: Hammer’s The Devil Rides Out (directed by Terrence Fisher) and Robin Hardy’s The Wicker Man. (Anyone familiar with that movie will spot where the plot is heading long before Box does, but the fun is in the journey!) The Devil Rides out was based on a novel by the prolific Dennis Wheatley, whose supernatural WWII-era spy thrillers are clearly a huge inspiration on Gatiss. He mixes all these ingredients, plus more (‘30s pulp fiction and comic strips, Marjery Allingham and her ilk, and a healthy dose of P.G. Wodehouse), adds his own, unique authorial touches and comes out with an expert blend of recycled pop culture every bit as skillful as Quentin Tarantino’s artful melanges of ‘70s film genres. Personally, I couldn’t be more pleased with the result. It’s as if someone (well, Mark Gatiss, to be specific) took all the entertainment I love most (James Bond! Hammer! Bertie Wooster!) and mixed them together into The Damn-Near Perfect Novel.

Yes, I loved this book that much. The Devil In Amber was just about the most pure enjoyment I’ve gotten out of any book in a long time. Even as I raced through the pages, I didn’t want it to end. And now I can’t wait for the third volume, presumably due late this year.

The Devil In Amber is set some time after The Vesuvius Club, although once again Gatiss makes it hard to pin down an exact year. Lucifer Box is older, and constantly feeling his age (especially with a hotshot younger agent biting at his heels), but he’s still just as full of himself as ever. As a narrator, he never misses an opportunity to inform us of just how handsome or... generally great... he is. And he’s still just as amoral, too. He’s a cad, through and through, and impossible to dislike for it. He’s like the polar opposite of Adam Adamant (of whom Gatiss makes no secret of his admiration, popping up all over the DVD’s special features!) While Adamant represents all the virtues of the perfect Edwardian gentleman, Box is all the sin and vice of that era wrapped up in a devilish smile.

The humor in The Devil In Amber, like Vesuvius, comes mainly in the narration, and in the organically funny predicaments Box finds himself in over the course of his adventure, amidst all of his near-death escapes. Despite what you might expect from a TV comedian, these books aren’t parodies, but pure pastiche. They are stright-up adventure stories, with humor. Like his fellow veterans of British comedy, Charlie Higson and Hugh Laurie, as an author Mark Gatiss takes his spy/adventure stories very seriously.

If you’re a spy fan, do not pass up this book because it draws outside the lines of the genre. It’s still a spy novel, albeit one with a Brimstone threat instead of a nuclear one. There’s intrigue aplenty within Box’s agency, and within an embryonic American counterpart agency as well. The addition of the supernatural Macguffin gives it the feel of an Indiana Jones movie (always a good thing, if you ask me), and I would absolutely LOVE to see this book filmed. Unfortunately, given the fact that the hero is as apt to jump into bed with a man as a woman, that’s probably unlikely to happen in Hollywood. Box’s bisexuality is really not nearly as central to the story as it was in The Vesuvius Club, but I doubt Gatiss would allow a studio to excise it entirely. So I can’t imagine a movie coming any time soon, which is a shame. In the mean time, I certainly hope there’s a graphic novel adaptation once again, as there was for The Vesuvius Club. (Like that book, the British edition of Amber features occasional full-page illustrations, complete with dialogue captions. It’s a different artist, with a style more appropriate to the 1930s.)

I can’t recommend this book enough.
Posted by Tanner at 7:43 PM

Great review. Apparently this was more of a homage to author Dennis Wheatley, who wrote The Devil Rides Out , (which you mentioned) and To The Devil A Daughter.

I haven't finished reading The Devil in Amber yet, but I am struggling with it a bit. For me, it doesn't have the charm of The Versuvius Club. But I will persist.

On a similar theme, I thought Higgson's new Young Bond book, Double Or Die was brilliant.

Great review. Apparently this was more of a homage to author Dennis Wheatley, who wrote The Devil Rides Out , (which you mentioned) and To The Devil A Daughter.

I haven't finished reading The Devil in Amber yet, but I am struggling with it a bit. For me, it doesn't have the charm of The Versuvius Club. But I will persist.

On a similar theme, I thought Higgson's new Young Bond book, Double Or Die was brilliant.