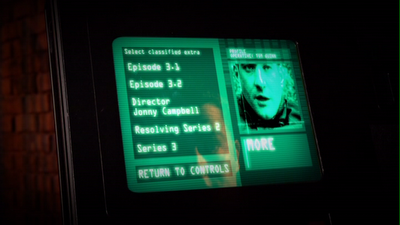 I didn’t get to the bonus features in the first part of my Season 3 review, so I’ll address them now.

The long, creative but ultimately irritating "menu story" about a spook breaking into an office is finally gone this season... only to be replaced by another long, irritating sequence (fortunately skipable)! This time it’s an agent setting up a laptop in a dark alley and then being shot at. (No, it doesn’t make much sense.) The good news is that the menus themselves are now easier to navigate than the desk menu, but they still have that bright "computer screen" font that makes them very difficult to read. Also, make sure you don’t miss the "more" option on the bottom right of the "Extras" menu on each disc, because it’s easy to overlook, and the deleted scenes are among the "more." The show is edited awfully tightly, and nearly everything that really matters finds its way in. The deleted scenes are usually just snippets, and rarely add anything. (The main exception, found on Disc 4, is a long scene at a café between Danny and Adam following Zoe’s departure.) Still, it's nice to have them included. And if you're a big fan of techies Malcolm and Colin, a lot of their comic relief moments end up here.

There are again interviews with directors, writers and actors. Something for everyone no matter what aspect of the series interests you most. They err to the side of including too much rather than too little, and while I was dismissive of that tack in my Season One review, I’ve come to admire it. Not every featurette or interview will appeal to every viewer, but chances are at least one of them covers what you want to see. I should note that the featurettes on MI-5 in general tend to be interview-heavy, mostly talking heads against a black background interspersed with occasional footage from the series. There is not a lot of behind-the-scenes material to be found, but the heads usually have something interesting to say, and it’s a relief to see bonus material that respects the audience enough to just let someone talk, and not interrupt them with cheesy animations or MTV-like graphics. (I’m looking at you, Ultimate Flint Collection!)

The best of the many featurettes are the general "Season 3" documentary, which discusses the effect of various actors leaving on the writers, and how that shaped the season, and a "Hellos and Goodbyes" segment focusing on the same thing, this time primarily from the actors’ perspectives. That one’s somewhat cathartic to the viewer if you find yourself saddened by any of the exits! Go straight to "Hellos and Goodbyes" and listen to the actor or actress talk about leaving, and it softens the blow a bit. Also interesting is a segment in which the writers discuss "Relating to the Real World;" how much they bring in from actual headlines, and how often they eschew fact for fiction. Finally, the individual episode documentaries are carried over from Season 2, and they’re still the most essential feature on the set. Easily digestible in nine minutes or so, they’re good to watch immediately following an episode to delve a little deeper into its themes and get a sense of what went into making it. They’re also good if you don’t have time to sit through the entire commentary track–most of which are interesting and informative.

MI-5 Volume 3 continues the series’ high-quality presentation, offering more bonus content than you could possibly hope for.
Posted by Tanner at 6:44 PM