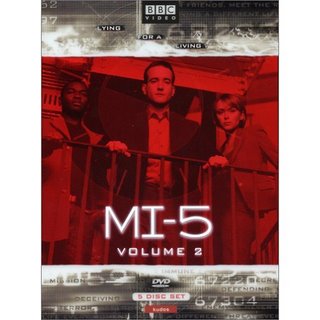 Continued from my earlier review of Season 1...

Season 2 of MI-5 (Spooks in the UK) continues Tom’s ongoing story arc, as the myriad pressures of his job play hell with his social life and begin to destroy him as a person. He’s keen enough to realize what’s happening, and by the end of the season finds himself questioning Harry’s authority more and more, disagreeing with many of the actions he’s asked to take. (This storyline, however, doesn’t reach its climax until Season 3.) With four more episodes than the first season, there’s a bit more breathing room and Zoe and particularly Danny get more opportunities to shine. It’s not quite as solid overall as Season 1 (you’re bound to get a few clunkers with a longer season), but contains some of the best individual episodes of the entire series (to date, anyway).

Once again, MI-5 doesn’t shy away from controversial issues. This isn’t fantasy spying like Alias; MI-5's officers deal with realistic, modern-day threats. In Episode 2, they face a mosque in Birmingham whose chief cleric is indoctrinating Muslim youth as suicide bombers. Tom’s only asset inside the mosque is tortured into brain damage, leaving the team with a dilemma faced too often by American and British intelligence agencies in the past six years. As Tom puts it, "We don’t have the personnel of the right culture."

"You mean color," clarifies the Algerian operative he’s trying to recruit, impressively played by Syriana’s Alexander Siddig (better known for one of those Star Trek shows, I think...). He hits the nail on the head, and Tom needs him badly enough to use him despite the strong possibility that he may be a double agent. The drama builds to the powerful and shattering climax we’ve come to expect of MI-5.

In the show’s most entertaining episode yet, Danny goes undercover at a bank that’s being used to launder money for the Russian mafia. He finds himself adept at high finance, and starts to enjoy the assignment a little too much. The writers aren’t afraid to let their characters have flaws, and Danny’s easily dazzled by dollar signs. (We’ve already seen him attempt a credit card scam in Season 1.) It’s a sign of humanity in a profession that can easily dehumanize its practitioners, and it puts Danny in contrast with the cool, aloof Tom, who is in danger of becoming an automaton. But the episode isn’t all warm character moments. There’s danger, political skullduggery (courtesy of Hotel Rwanda’s Sophie Okonedo as a Downing Street rep who clashes hard with Harry) a brutal villain (Rade Serbedzija, from The Saint and Eyes Wide Shut) who likes to crucify his enemies, and a sexy femme fatale (Julie Cox). Like all the best MI-5 episodes, it’s a mini-movie, and a thoroughly satisfying espionage yarn.

Another highlight of the season is the penultimate episode, in which Tom and Zoe go undercover to turn the girlfriend of a ruthless Columbian narco-terrorist into their agent. As with all the episodes that focus on this aspect of spying, it’s heartbreaking. They do whatever is necessary to appeal to a lonely woman in a dire situation, seducing her with much-needed friendship and ultimately putting her in grave danger. These MI-5 officers find themselves having to do repulsive things, but all in the defense of their country. To what ends are they willing to go? This episode serves as another touchstone in Tom’s ongoing soul-erosion, to borrow an appropriate term from Ian Fleming.

I did mention that this season was a bit uneven. Amidst these very strong episodes are some weaker ones, two of them having to do with kids. One deals with a vengeful teenage hacker who manages to bring MI-5 to its knees from his laptop, and another finds the team recruiting a teen with a photographic memory to break into a high security facility for them, maintaining their own deniability in a plot worthy of Alex Rider. I suppose both stories are somewhat plausible, but putting them so close to each other hurts both. Even though the main plotlines of these episodes are flawed, both contain plenty of good character development, the former with Zoe and the latter with Tom. The storyline about Zoe going undercover as a teacher is particularly effective, because she enjoys it too much. She enjoys living a "normal" life, and Tom cautions her about the dangers of disappearing too far into her cover.

Like Season 1, Season 2 ends with a cliffhanger. I found it somewhat less effective than the first one. For me, the episode drifted a little too far into Alias/24 territory, with vengeful renegade CIA agents and vast government conspiracies. That took me out of the more realistic realm of MI-5 that I’ve grown comfortable in, and thus the climax was not as edge-of-your-seat suspenseful as the final moments of the first season. Still, the episode continued effectively unraveling Tom’s character, following up on seeds planted in the prior two episodes. It’s an interesting character arc to see in this sort of show, one we don’t see too often in spy series, but that must be quite common in real life. It doesn’t seem like there can possibly be much new ground to tread in the genre, and it’s a credit to the writers of MI-5 that they manage to find it. Season 2 is just as much essential viewing as Season 1.

Again, there are numerous special features. And, again, they are wrapped up in that same annoying menu. Features are found in different sections of a desktop, and it seems arbitrary where they’re placed. I thought I’d exhausted all the features on one disc, only to find a short documentary on scoring the series tucked away in an unexpected place. I guess this can be rewarding if you really like exploring DVDs, but I prefer a well-organized menu with easily accessible features. If you’re willing to do the work, though, you’re rewarded with loads of fascinating behind-the-scenes information.

Again, there are extensive actor interviews. They still run the gamut, focusing on the actors’ entire careers rather than just MI-5, but they’re shorter and seem more to-the-point. Perhaps I was too dismissive of this feature in my first season review; it is interesting to find out what else the actors on the show have done, and you really can’t have too much bonus content.

There is an overall documentary on Season 2, but the most interesting featurettes are short documentaries on each individual episode, containing interviews with writers, directors and actors. Especially interesting is that these documentaries aren’t propaganda; they’re "warts and all." The subjects give their genuine opinions, being quite frank if they didn’t like how the episode turned out. Writers also freely admit where they have embellished the truth for the sake of their fiction, doing their research but then ignoring it in order to tell a better story. These featurettes supplement the commentary tracks nicely, and stand on their own just as well. It’s a good feature that continues on subsequent seasons.

Overall, MI-5 Volume 2 (as it's officially called) is an impressive package, and worth the rather hefty price tag. You get a supurb season of television, and hours and hours of well put together bonus features.
Posted by Tanner at 7:57 PM