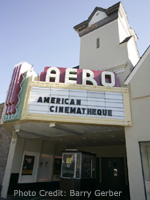 Classic Bond On The Big Screen In LA

Those Bond screenings at the Aero Theatre in Santa Monica that I mentioned back in December are finally scheduled, for Feb. 1-3. And it sounds like a great weekend! Their website promises "new, restored prints" of five early Bond movies: On Her Majesty's Secret Service, Thunderball, You Only Live Twice, Dr. No and From Russia With Love. In my opinion, that's a really great line-up! Mainly for two reasons: 1. It does include OHMSS, my favorite Bond, which is rarely screened in theaters, yet plays best there, and 2. It doesn't include Goldfinger, which is obviously a fantastic movie, but plays every time any revival theater does a Bond night! I try to go every time Bond plays in LA, but I'm getting pretty sick of seeing Goldfinger. If, however, you haven't managed to catch one of its many, frequent screenings, fret not. It's playing at the New Beverly Cinema along with From Russia With Love Feb. 12-13. (The New Beverly is also showing the 1967 Casino Royale Feb. 25-27, appropriately paired with What's New, Pussycat?)

At the Aero, things kick off on Thursday, Feb. 1 at 7:30 with OHMSS. Friday is a double feature of Thunderball and You Only Live Twice, also starting at 7:30. Saturday at 4pm, there's a free, three-hour Bond trivia contest hosted by Steven Jay Rubin, author of The James Bond Films and The Complete James Bond Movie Encyclopedia. That's followed, at 7:30, by a double feature of Dr. No and From Russia With Love.

If you're in the area and any sort of Bond fan, I really, really recommend catching the OHMSS screening. I saw this a few years ago at the Egyptian in Hollywood, and it was an amazing experience. It's a great movie, but it was even better projected on film (a dye-transfer technicolor print) on the big screen. A great experience. Hopefully, the Aero will have just as great a print.
Posted by Tanner at 11:53 AM

I attended the trivia contest and it was a blast. I blogged about it at http://dadisbad.blogspot.com/2007/02/bond-trivia-contest.html