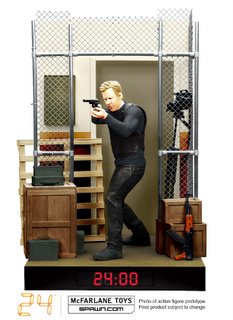 McFarlane Toys announced today a licensing deal with 20th Century Fox to produce action figures based on 24. For those in the dark about action figures, McFarlane are famous for producing incredibly detailed figures with great likenesses and zero posability. They're usually sculpted into some unweildly pose (although it looks like Jack may have escaped that fate), like hanging upside down or something, and might have a moving wrist and neck. So if you want to play with them, you're out of luck. But they do make good display items, and this Jack Bauer looks cool. Already in production are two separate Jack figures in different diorama environments from the show. The first one is due in August, the second around Christmas 2007.

Now if only someone would put out a decent JAMES BOND action figure! (Yeah, the Sideshow figures are great, but they're dolls, not action figures...)
Posted by Tanner at 8:22 PM