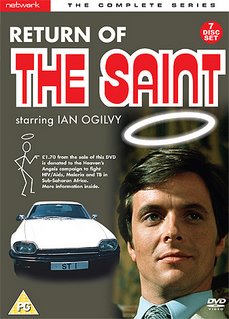 Network have announced more details about their upcoming Return of the Saint complete series DVD, and released a cover image. In addition to every episode, the set will include an exclusive new documentary narrated by Sir Roger Moore called "The Saint Steps In... to the 70s" with interviews with star Ian Ogilvy, producer Robert S. Baker and others. There will also be four new, exclusive audio commentaries, a featurette called "The Saint at Elstree" (about Roger Moore receiving a plaque at the studio last month), PDF's of the 1979 and 1980 Return of the Saint annuals, and a PDF script gallery presenting original scripts plus meeting notes and changes. Fascinating! Best of all, an unproduced script will also be included, in which the Saint fights vampires! (I, for one, would love to read that.)

Network's set will also carry over a number of special features from Umbrella's Australian release, including the feature film version of "The Brave Goose" (two episodes strung together for European theaters), commercial break bumbers and textless material, image galleries, PDF's of original promotional materials and trade articles, storyboards for the title sequence and an alternate European title sequence with a horrible vocal theme called "Taking It Easy." All that and more. Phew!

Unfortunately, there will still be no definitive release of this show, because Network are apparantely not including the audio commentaries recorded for the Umbrella set. I really wish that different studios would license each others' commentary tracks so that fans wouldn't need to track down every version to hear different episode commentaries! (Well, not that this fan can afford to do that, but it would be nice.)