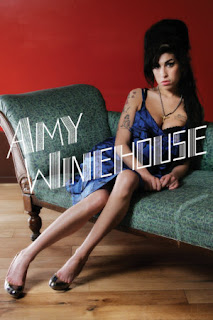 According to Contact Music, Amy Winehouse plans to release the unused Quantum of Solace theme song she and producer Mark Ronson cooked up. I can't say I'm surprised; there's a long history of unused Bond songs seeing eventual release, from unofficial submissions like Alice Cooper's "The Man With the Golden Gun" to officially solicited auditions like Pulp's "Tomorrow Never Dies" to actual Bond songs scrapped at the last minute like Dionne Warwick's "Mr. Kiss Kiss Bang Bang" from Thunderball and Scott Walker's "Only Myself To Blame" from The World Is Not Enough. As much as I'm looking forward to hearing Jack White and Alicia Keys' "Another Way To Die," I'm glad that the Winehouse track will be available as well. Two Bond songs are always better than one! (Just look at Tomorrow Never Dies, which actually offered two fantastic official title songs, Sheryl Crow's eponymous opener and k d lang's "Surrender" over the end credits!) According to Contact Music, however, the diva's reasons for releasing her own take are far from charitable:

Winehouse admits she wants to "prove that they have made a big mistake." She tells Britain's New Magazine, "I do think they could have waited a bit. If they want a worldwide hit I have them all up here (pointing to her beehive)." I guess they are going for clean-cut and boring. When I do release mine - and I am tempted to do it on the same day [as White and Keys' song] - this would be the bigger hit. If they change their minds I'm waiting!"

I'm a little surprised to hear her speak as if her song had actually been rejected; the way Ronson told it, Winehouse was unable to finish the track thanks to her substance abuse issues. I hope this doesn't create any bad blood between the singer and the Bond producers, because once she gets her act together, I really would love to hear an official Amy Winehouse Bond track.
Posted by Tanner at 1:08 AM

too bad Winehouse lost that James Bond gig, she has a unique sound, would have done the job admirably