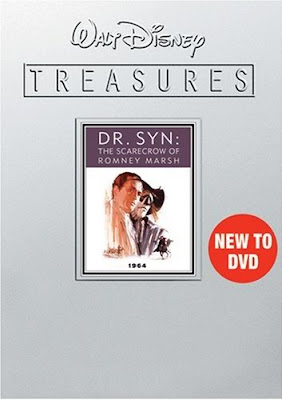 TVShowsOnDVD posted the cover artwork for Disney's upcoming "Walt Disney Treasures" release of Secret Agent star Patrick McGoohan's only major non-spy TV show of the Sixties, Dr. Syn: The Scarecrow of Romney Marsh. McGoohan fans have been clamoring for years for this DVD, so it's great to finally see artwork... to know it's really--finally--that close to being a reality! The 2-disc set will include all three hour-long TV episodes of the miniseries, as well as the edited theatrical version. Presumably it will come in a silver tin, like previous Walt Disney Treasures releases. Dr. Syn: The Scarecrow of Romney Marsh hits stores November 11 and retails for $32.99.
Posted by Tanner at 11:39 AM

Great show. I remember it fondly. I even followed up by reading Thordyke's books. Thanks for the tip off.

It's about damn time