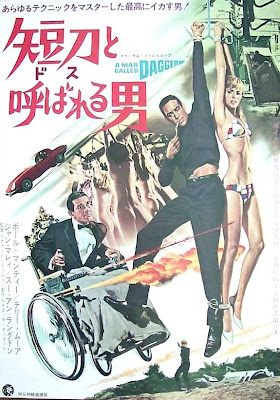 Movie Review: A Man Called Dagger (1967)
Here’s another movie, like Dimension 5, that can only be described as “American Eurospy.” This low budget Bond ripoff (or, more accurately, Flint or Helm ripoff) is as sluggishly paced as Dimension 5 (I have to confess, it took me three nights to get through its eighty-some minute running time), its hero is less likable, and it doesn’t bring anything new or original to the genre the way Dimension 5 did, but it does offer more memorable setpieces and more humor, putting the two films on roughly equal footing. Director Richard Rush, who would later earn an Oscar nomination for The Stuntman, a bona fide masterpiece with Peter O’Toole, stretches his micro budget very creatively. In the best example of that, he and his art director manage to turn one tiny set into a vast, futuristic underground villain’s lair in one of the movie’s most exciting sequences.

After having rescued a damsel in distress, secret agent Dick Dagger leads her through a corridor that’s actually a series of cube-shaped rooms with large garage doors that slam down behind them as alarms blare. The pair stay one step ahead of each shutting door, and even though this requires only one and a half cube-shaped sets, it gives the impression of a much larger space and maintains a breakneck pace for their escape. When the girl falls behind and a door separates her from Dagger, they both end up sealed in their cubes. Suddenly, a different wall of Dagger’s cube opens up, revealing the villain and his colorful minions waiting in an ornate stateroom. It’s a very clever piece of budget-conscious set design.

Another visually cool moment has Dagger and the villain orchestrating a prisoner exchange from opposite ends of an escalator. Suspense builds as one prisoner rides up the up escalator toward Dagger, passing the other one heading down the down escalator to the bad guys. The camera impressively swirls around this whole spectacle, once again turning a bland scene in a very mundane setting (it’s just an escalator!) into a strikingly executed setpiece–and even adding a new spin to a familiar convention of the genre. Unfortunately, the same can’t be said for every scene in the movie. 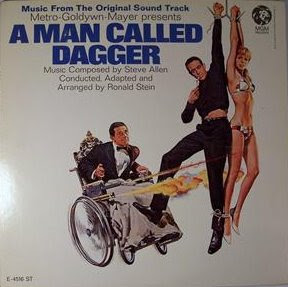 A Man Called Dagger starts off with a boring fight scene where all the action seems to happen off-screen. We hear gunshots and punches somewhere, and the improbably awesome score by comedian Steve Allen (owing way more than a bit to John Barry’s Bond scores of the period) alerts us that what’s happening is supposed to be exciting... but all we see on camera is star Paul Mantee charging up some stairs in a lame eyepatch disguise.

Mantee is the movie’s single biggest liability. He’s really one of the worst spy heroes of the era. Sporting an awful, awful receding Paul Simon haircut, he simply doesn’t look like a leading man, for starters. Furthermore, he displays none of the animal magnetism called for in a character who prompts one conquest to breathlessly comment, “I’ll bet your women have their work all cut out for them. No hobbies, no pastimes... just you.” Really? Him?

Despite possessing none of the necessary charm, he has no trouble conveying the requisite loathsomeness and misogyny demanded by the genre. In a scene apparently intended to make him look suave but backfiring horribly, Dagger tortures a woman for information by turning up the heat in her shower to excruciating levels and not letting her out. When she finally talks, he turns on the cold and tells her to keep her cool. Nice guy.

Luckily, the hero’s shortcomings are more than offset by the villain’s strengths. Paul Mantee fails to make even a dashing secret agent charming, but Jan Murray manages to conjure up charm to spare playing a Nazi! Now that takes skill! His urbane, wheelchair-bound Dr. Koffman is the sort of villain who happens to keep replicas of famous dictators’ headgear around his office. They make handy props when he gives a speech to his minions about why past would-be world conquerors all failed. (Hitler forgot that “nice guys” finish last.) Koffman holds court with a motley assortment of colorful underlings, including a young–and very funny–Richard Kiel, essentially playing a toothless Jaws. Koffman talks down to his associates with an amusing condescension that prefigures Gene Hackman’s Lex Luthor... or echoes Michael Dunn’s Dr. Miguelito Loveless from The Wild Wild West. Yes, Dagger’s rogues’ gallery would be right at home on that show.

Murray still charms even when behaving badly. When his moll successfully seduces Dagger and feeds him the misinformation she was supposed to, she asks Koffman if she did a good job. “No,” he snaps, striking her. “That’s for the three hours it took you to tell him!” And when Dagger asks him point blank how he disposes of the victims of his unsuccessful experiments, Koffman calmly replies, “In a very amusing way.”

Dagger himself could take lessons. His quips leave a lot to be desired (when Koffman tells him he uses a machine to brainwash people, Dagger asks, “Washing machine?” Groan!), and he’s got little patience and an unpleasant temper. Thrusting some sort of doohickey at a woman, he sharply orders her, “Swallow this.” When she’s understandably a tad reluctant and merely asks what it is, he snaps and repeats, “SWALLOW IT!” in a nasty bark. Only after this embarrassing outburst does he take the time to explain that it’s a homing device.

Some of his cohorts on the side of the angels aren’t much better. When a beautiful woman named Joy sneaks into Dagger’s hotel room (seeking his help), her magnificent decolletage is sadly offset by the fact that she appears to be... mentally challenged. I suppose she’s meant to be a bimbo, but Maureen Arthur’s utterly childlike delivery gives the impression of a serious handicap. The notion that the slimy Dagger is about to take advantage of such a person is enough to make the skin crawl. And her apparent condition makes it weird that when he turns around she’s suddenly naked, in the shower. “I like showers,” she explains simply, and it doesn’t sound seductive; it sounds childlike. Like she really does just like showers, and routinely gets into random people’s showers because she doesn’t know any better.

Despite setbacks like this, though, the movie builds to a pretty cool finale. Once he starts kicking ass to the chords of some great spy music, even Dick Dagger starts to seem kind of cool. And his showdown with the toothless Jaws (during which he makes the same mistakes 007 makes a decade later, finding that his punches have no effect on the human giant) is nothing compared to his showdown with the crippled Koffman! Koffman’s wheelchair comes equipped with flame throwers, extend-o-spears and all sorts of cool stuff normally reserved for Aston Martins. On top of that, though, it turns out he doesn’t even need the chair! He was faking, leaving him free for a terrifically surreal knife fight in a meat locker, in which the urbane, tuxedoed Koffman slashes at Dagger with a meat cleaver! (Dagger himself sports a dagger, naturally enough.)

The movie eventually comes to a spectacularly sleazy conclusion, in which Dagger ends up with not one, but two of the movie’s buxom babes. We zoom in on their bikini-clad bottoms, the words “The” and “End” stamped on each one, and sub-Bassey wailing about “A Man Called Dagger” kicks in on the soundtrack. And it’s exactly the song I’ve been hearing in my head ever since I first laid eyes on the movie’s incredible poster a decade ago! 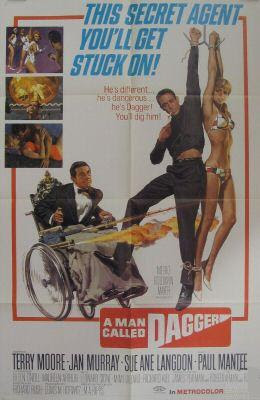 Overall, the movie you get isn’t nearly as awesome as the movie promised on that poster (how could it be?), nor as the movie you’d see in your head listening to Allen’s jazzy score. (I still can’t believe Steve Allen wrote a great spy score!) But it is entertaining, with flashes of brilliance in the direction. And a splendid villain and villainous entourage more than make up for a less-than-beguiling hero and a total lack of chemistry between him and his ladies.

For another (altogether less favorable) opinion on A Man Called Dagger, check out David Foster’s recent review. You can also watch the trailer on his blog, Permission to Kill.
Posted by Tanner at 10:28 PM

Great review for a poor film. You have a lot more patience with this film (and Jan Murray) than I, and actually make it sound worth watching.