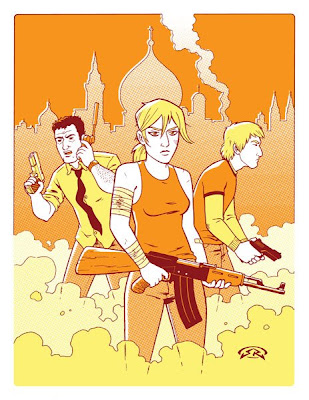 At the Oni Press booth in San Diego, writer Greg Rucka filled me in on what the future holds for his fantastic spy series, Queen & Country. It's been a while since we've seen Tara Chace in comics, and even longer since the last novel, Private Wars. So what's next? Sadly, more waiting... for now. Rucka says the comic book series will return in 2010 from Oni Press. As he's said before, he wants to give Tara's daughter, Tamsin, a chance to grow up enough to be a character instead of a distraction. When we do see Tara again, a lot will have changed in her world. She'll have taken over Paul Crocker's job as D-Ops (Director of Operations) at SIS, and there will be a new female Minder 3 who finds herself with the worst boss in the world, Rucka says, because Tara did already did everything she has to do first, and did it backwards and in high heels. I like that dynamic. What I didn't ask him, unfortunately, was where that will leave Crocker! Presumably he'll become C, because he has to still be part of the series. I sure hope so! I've come to enjoy the Crocker segments even more than the Chace ones. It will be interesting, however, to see poor Tara try to navigate those rough political waters Crocker had to as D-Ops. She doesn't seem very well equipped for the bureaucratic side of the spy business.

Rucka has no plans for another Q&C novel right now, largely because they take so long to research. His next novel will instead once more feature his regular hero, Atticus Kodiac. There's no movement happening on the Q&C movie right now, as far as Rucka knows, but he remains hopeful for the future...

In the meantime, Rucka has another comic debuting this winter, a private eye series called Stumptown. There were previews available at Comic-Con, and it looks–as expected–great. There's another strong, yet seriously flawed, female protagonist in a traditionally male profession–Rucka's specialty. He says his primary influence was The Rockford Files. True, it's not Queen & Country, but nonetheless I'm thrilled to see Rucka doing independent comics again! Stumptown looks to be another treat. 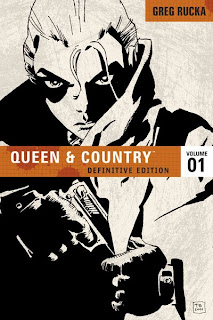 In lieu of new Tara Chace comics, Queen & Country fans can look forward to the third volume in Oni's essential "Definitive Queen & Country" series of trade paperback reprints due out next week. For any spy fans who've never heard of Q&C, Volume 1 of that series is the place to start.
Posted by Tanner at 12:45 PM

Damn! Another whole year and thanks for the heads up about the next collection coming out next week. I knew I should have held off with ordering The Archer Files till I knew when that was coming out oh well.