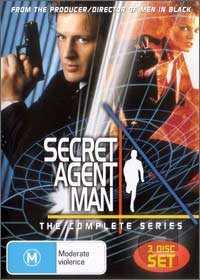 Secret Agent Man DVDs
Only last month I was speculating about the defunct UPN's 2000 half-season TV show Secret Agent Man, and lamenting the fact that it was unlikely ever to surface on DVD. Well, it turns out that it's actually been available on DVD for several years in Australia! I only just became aware of that thanks to David Foster's excellent blog, Permission to Kill, where he reviews the Barry Sonnenfeld-directed pilot episode. Secret Agent Man featured the adventures of Monk and Holliday, agents of P.O.I.S.E. and attempted to recapture the feel of Sixties spy shows like The Man From U.N.C.L.E. The three-disc Australian DVD contains all twelve episodes and is available from EZYDVD.
More On The Family Bond
We've got some more information on The Family Bond, the comedic spy spec picked up by Universal in June. Writer Jeff Lowell dropped by and left a comment answering some of my questions about the project, asserting that it is a "family action comedy" and revealing what sounds like a promising setpiece in which the superspy father teaches his sixteen-year-old daughter how to drive amidst a car chase. Sounds great--a bit like Tom Courtenay's hilarious car chase during his driving exam in one of my favorite spy comedies, Otley!
Bond On Kindle
Reader Chris Wright sends the alert that all of Ian Fleming's James Bond novels are now available for Amazon's next generation book format, Kindle. He's got more information (including an in-depth review of the product) up on his blog at FelixLeiter.com. Unsurprisingly, Sebastian Faulks's recent high-profile pastiche Devil May Care is also available for the device.
Kim Possible At Epcot 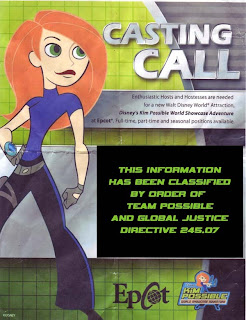 Reader Daniel Hurlston, always a great source for Kim Possible news, wrote in to tell us about a new, interactive spy adventure based on KP characters at Disney's Epcot Center. It sounds great, and like a great way to make Epcot more... fun. Families will simulate a globetrotting espionage escapade by finding clues in the various "countries" throughout Epcot Center. (Various pavilions represent different countries and cultures of the world.) Guests will be guided by their very own "Kimmunicator," based on Kim's unique communication device from the show. Furthermore, they'll get to interact with Kim's villains and allies in the various locations while attempting to save the world. There will be over fifty possible interactions and top secret devices hidden in the World Showcase pavilions at Mexico, Norway, China, Japan, France, Germany and the United Kingdom. There are seven specific missions to go on, each one taking about forty-five minutes. This actually sounds really cool! The Kim Possible World Showcase debuts late 2008.
Thanks to Daniel for the pictures! 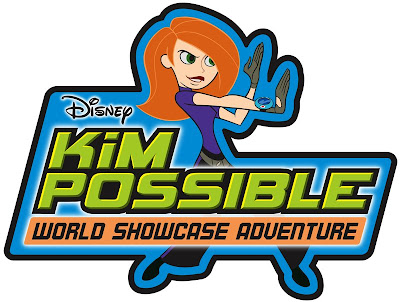 Secret Agent Man gets a dvd release but no Fortune Hunter? Philistines!

Fortune Hunter is another one of those 90s/early 2000s spy shows I'd love to see on DVD! And Sam Raimi's Spy Game. Even Undercover.

I don't remember Spy Game or Undercover but I have jonesing to see the unaired episodes of Fortune Hunter since I heard they were aired in the UK.