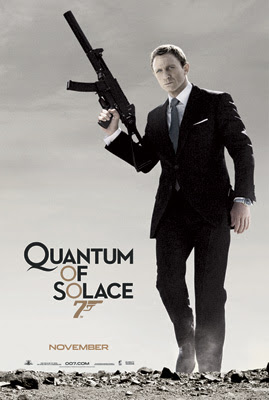 God damn Warner Brothers. It was bad enough when they delayed Harry Potter and the Half-Blood Prince eight months from Thanksgiving until next summer just to even out their quarterly earnings reports because The Dark Knight has made so much money. I was really looking forward to that Bond and Potter one-two punch this fall. But it just keeps getting worse. Now, according to Variety, Sony have responded by pushing Quantum of Solace back a week in the U.S., filling in the November 14 gap. True, it's a more traditional Bond release date, and it's closer to the holiday, but it's still a week later... and two weeks later than the UK opening! Mostly, though, this hits me at a personal level. I've already made travel plans around the original Quantum opening date! And I'm the best man in a wedding on November 14. Oh well. I'm sure their union will be especially blessed, coming on a James Bond date, so that's good. But... God damn Warner Brothers!
Posted by Tanner at 10:56 PM

Email ThisBlogThis!Share to TwitterShare to FacebookShare to Pinterest
Labels: Quantum of Solace