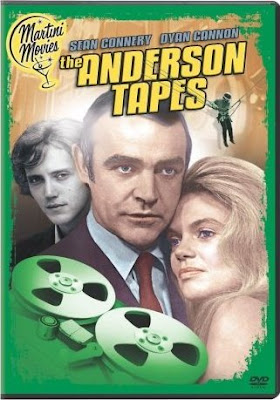 Sony will release Sean Connery's 1971 heist movie The Anderson Tapes on DVD September 23 as part of their "Martini Movies" promotion. While it's been available for quite some time as a Region 2 disc in Britain, this will be its U.S. debut. Directed by Sidney Lumet and adapted from the novel by Lawrence Sanders, The Anderson Tapes co-stars Dyan Cannon, Ralph Meeker and a very young Christopher Walken. A remake is currently in the works.
While you would think that a "Martini Movies" wave would include a lot of spy-type flicks, that's not really the case. In fact, the promotion doesn't make a lot of sense to me. Supposedly each title will boast a featurette on how to mix certain drinks cut to clips from the movies of people drinking. Also, each title (particularly this one) will feature ugly cover art. One other title of interest in the collection is $, another 1971 heist movie starring Warren Beatty, Goldie Hawn and Gert Frobe.
Posted by Tanner at 9:38 PM

Ugly cover art is the rule, not the exception, with dvds nowadays. Martin Balsam steals that movie.

Actually this was on DVD already as Region 1. Just looks as thought they are repacking it with somewhat better art. But trust me its no great improvement.

Really? Do you have a link to the old art? As a collector, I'd like to see it. There's no evidence of a previous American release on Amazon Marketplace or Ebay, and in its press release Sony claims all the titles in this collection, including The Anderson Tapes, are "making their U.S. DVD debut." I've searched for this title for a long time, and eventually bought the Region 2 one. That art's not great either, but it's better than this. There's a mysterious "import" (probably a bootleg) on Ebay that uses the still-life style poster art, and that's cool. I don't know why studios can't just do that. Delmo's right, good DVD cover art is very rare these days. Badly Photoshopped montages are the rule of the day...

It was the region 2 DVD I was thinking of

That makes sense. You're right, that cover's not so hot either, but I'd definitely take it over this one! When I first saw that new Martini Movies cover, I thought it must be a budget label release, the kind you'd find for $5.99 in a supermarket!