Young Bond Cover Leaked
It may be officially embargoed until the book's publication on September 3, but if Penguin was really keen on keeping the cover for Charlie Higson's upcoming Young Bond finale By Royal Command a secret, then they probably shouldn't have put copies of the book on sale more than a week early at the Edinburgh Book Festival! (See details on the Young Bond Dossier.) I won't spoil their fun by posting it here, but the cover is very easy to see on Ebay. And, unsurprisingly for a series whose last volume was all gold, it looks amazing. We're coming right up on the publication date, and I can't wait to see what Higson's cooked up for us! Pre-order By Royal Command at Amazon.co.uk (no U.S. release date yet) and be sure to check out YBD for all the exciting things going on in the world of Young Bond in conjunction with the book's debut. 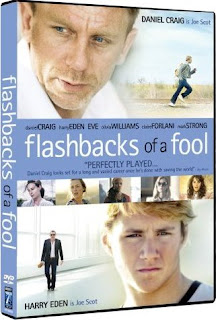 It looks like Daniel Craig's Flashbacks of a Fool will indeed get a U.S. theatrical release--albeit a brief, limited one designed as promotion for its impending November 4 DVD debut, timed to coincide with the opening of Quantum of Solace. DVDActive has the artwork for the Anchor Bay DVD--and the press sheet, which reveals that the company plans a theatrical release in September "to produce awareness and buzz." Flashbacks of a Fool, which features a soundtrack heavy on Seventies glam like Roxy Music and David Bowie, came out in British theaters this past spring. It's been something of a passion project for Craig, eager to balance his big budget Bond work with more personal, independent films like this.
Posted by Tanner at 1:24 PM