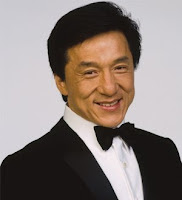 It seems the trades are full of spy comedies these days, and here's another. According to The Hollywood Reporter, Jackie Chan will star in The Spy Next Door for Pink Panther [remake]producer Robert Simonds. "Jonathan Bernstein and Jim Greer are penning the screenplay for Spy, which centers on a man (Chan) who is called to baby-sit his neighbor's children and winds up having to fight off secret agents after one of the kids inadvertently downloads a secret code." Brian Levant (Are We There Yet?) will direct.
Chan's last Hollywood spy comedy was The Tuxedo, but he's done much better espionage-themed action comedies in Hong Kong.
Posted by Tanner at 4:40 PM