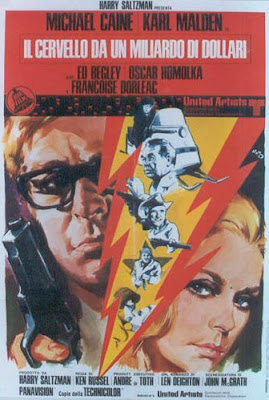 Richard Rodney Bennett's fantastic score to Billion Dollar Brain, my personal favorite of the excellent Harry Palmer trilogy, is finally getting a legit CD release courtesy of Film Score Monthly. The catch is... it's only available as part of a giant set called The MGM Soundtrack Treasury (1959-1983), and the set costs a lot of money: $129.99, to be exact. But for twenty highly sought-after scores, however, it's not much at all; it works out to be less than $6.50 a soundtrack if my math is correct. For spy fans, though, it is a lot to pay for Billion Dollar Brain alone. The Treasury came about as a sort of catch-all for rare scores demanding remastered CD releases, but that didn't really make sense on their own, often because of their brevity. Billion Dollar Brain, for instance, ran just under thirty-two minutes on the United Artists Records album master, the only surviving source for the recording. That was too short to justify a solo release, but the folks at FSM had trouble thinking of a suitable companion. While going through all the possibilities, they realized they had enough loose ends to create this amazing-sounding box set, so they did.
In order to keep the cost of the set down, they didn't print their usual super-detailed liner notes as a book; instead they made them all available online for free. The good news there is that it means everyone can read their excellent, typically comprehensive liner notes for Billion Dollar Brain here, and learn a lot about the movie and the score!
I'm pretty sure this is the first legit CD release this fine score has ever had. I have a CD containing it and John Barry's The Ipcress File together which I got at Tower Records way back when, but despite that respectable place of purchase, I'm fairly certain it's a bootleg. I really wish I could afford this set, because it's got a lot of great stuff in it (including Lalo Schiffrin's full score for Pussycat, Pussycat, I Love You, a favorite guilty pleasure of mine), but I don't even have FSM's Superman box set yet, so I'll have to hold off for now. But for spy music aficionados with deep pockets, I'd say Bennett's amazing score is worth the steep price!
Posted by Tanner at 1:22 AM

I got the Superman CD set and it was worth every penny. I'd like to get this set because of Billion Dollar Brain and Neal Hefti's "How to Murder Your Wife" but as I am between jobs at the moment I can't spare the cash. Last I heard there were only 150 copies left so, unless they release a 2nd printing, looks I will miss out.

The set has sold out at Screen Archives. Don't know if it is available anywhere else.

Thanks for the update, Delmo. Too bad! I don't think it's officially available elsewhere, though I'm sure it will turn up on Ebay eventually. Hopefully, FSM will press another edition, or maybe release some of the individual discs independently of the set sometime down the line...

I know it's a different composer etc., but here's a link to a rip of the soundtrack from Funeral In Berlin. The link to the soundtrack is almost at the bottom of the page.

Okay, I just found a rip of the original soundtrack for Billion Dollar Brain.