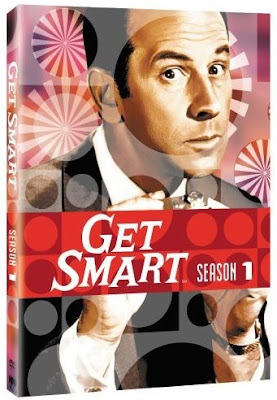 New Spy DVDs Out This Week
After a summer of pretenders and imitations, the real Get Smart is finally available in stores today–and at a bargain price, no less! You can pick up Get Smart - Season 1, starring Don Adams and Barbara Feldon, for under twenty bucks at most retailers. The catch? This HBO Home Video release doesn’t include the bonus disc that accompanied the first season in TimeLife’s online-only version from 2006... nor can it compete with TimeLife’s awesome Complete Collection packaging. Still, it beats their price by a very wide margin. So Smart fans who haven’t already acquired the that set are left with a tough choice: are copious special features and a cool, gimmicky box worth an extra $100 or so? Would you believe... maybe?
Still, the new Season 1 release is not altogether featureless. Since it does include the exact same discs as the TimeLife version (just one fewer), it's still got Barbara Feldon introductions on every episode, and a commentary with Mel Brooks and Buck Henry on the awesome black and white pilot. (Spy fans will find this set worth buying for that pilot alone; its tone is surprisingly Avengersy, and The Wild Wild West's Michael Dunn plays a great villain named Mr. Big.)
Posted by Tanner at 6:10 PM