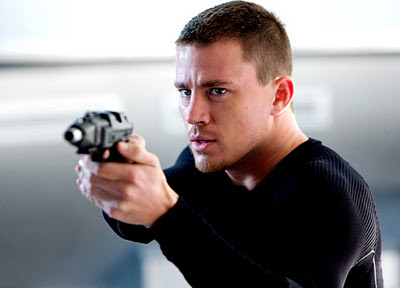 The unending Solo Sweepstakes continues this week with a new Napoleon Solo candidate du jour, and, honestly, I'm surprised it's taken this long to come around to this particular contender: Channing Tatum. The reason I would have expected his name to come up earlier is not because I think he'd be perfect for the part (though I have to admit, I can't really grasp what, exactly, the part is, since it's clear by this weird list of candidates that their Napoleon Solo is not the Napoleon Solo I know and love from the TV series), but because Tatum has become something of a regular for director Steven Soderbergh, who's helming the big screen remake of the classic series. So he seemed like something of a logical choice, and now Deadline reports that he's in line for the job. Tatum has a supporting role in Soderbergh's upcoming all-star spy thriller Haywire (read my review here), and he co-stars in the director's next project, Magic Mike, a male stripper drama based on Tatum's own experiences in that profession starring former Alex Rider star Alex Pettyfer. If Tatum is indeed cast as Solo, I wouldn't be terribly surprised to see blond Pettyfer's name come up as a potential Illya Kuryakin—provided he can manage a Russian accent.

At 31, Channing Tatum is at least the same age that Robert Vaughn was when he originated the role of U.N.C.L.E. superspy Napoleon Solo. His biggest action role to date was in G.I. Joe: Rise of the Cobra. I haven't seen that, and I haven't seen either of his Step Up dance movies. He impressed me, however, with his brief appearance in Michael Mann's Public Enemies, and I think the trailer for 21 Jump Street looks pretty funny. Frankly, I'm less bothered by the notion of him in the role than Bradley Cooper. What he lacks, however, is marquee value. With Channing Tatum toplining and a brand name that means nothing to most under-30 cinemagoers, the pressure will really be on Soderbergh to deliver the goods. And that's not a bad thing, either.
Posted by Tanner at 11:35 PM