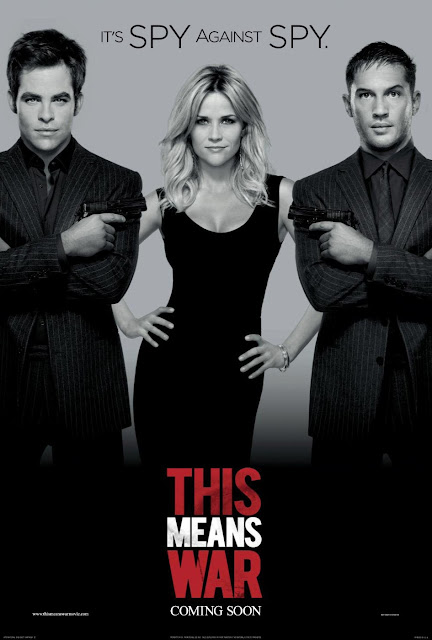 Here's the poster for McG's romantic spy comedy This Means War, which pits Future Jack Ryan against Tinker Tailor Soldier Spy's Ricki Tarr as rival spies using their CIA resources feud over a girl. It might be the biggest waste of Agency funds since Arnold Schwarzenegger's Harry Tasker spent a fortune to intimidate his wife's would-be suitor in True Lies, but the leads (Tom Hardy, Chris Pine and Reese Witherspoon) are appealing and McG has a good track record with this sort of lighter spy fare on TV in Chuck and Nikita. The trailer didn't really do much for me, but I have to admit, I think this 1-sheet is cool! Design-wise, at least. Hairstyle-wise? Not so much. What's on these guys heads? This real hair on Tom Hardy is even worse than his Tinker Tailor Seventies wig!
Posted by Tanner at 6:46 PM

Hair wars indeed. Bad helmets. Makes me think they are trying of off the gal in the middle to get to each other...

Hair wars indeed. Bad helmets. Makes me think they are trying to off the gal in the middle to get to each other...