Upcoming Spy DVDs: More Man in a Suitcase in January! 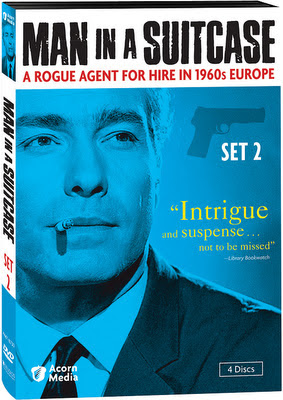 Acorn will release a second volume of the Sixties ITC spy series Man in a Suitcase, starring Richard Bradford as sacked CIA agent turned private operator McGill, on Region 1 DVD on January 3, 2012. This will be the first time these episodes, from the second half of the show's single, extra-long season, have been available in the United States. (The entire series was released in single volumes in Britain and Australia.) Many of McGill's best adventures are yet to come, so this is a welcome release and a must-buy for American ITC aficionados! Man in a Suitcase: Set 2 will retail for $59.99, though it will no doubt be availble for less from the usual online vendors.