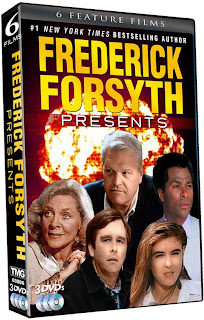 Wow, I never thought we'd see a Region 1 release of the 1989-90 ITV series Frederick Forsyth Presents. But TV Shows On DVD reports we'll be getting exactly that for Valentine's Day, from Timeless Media Group! So much did I doubt this would ever happen that I just imported the Region 2 version from Amazon.co.uk this past summer. Now it turns out I could have saved a lot of money... but at least I got better cover art! Because this TMG budget release sports some truly awful Photoshopping. That cover isn't representative of the six classy TV movies contained on 3 discs within. These movies are based on novellas contained in Forsyth's book The Deceiver. Alan Howard (best known as the voice of the Ring in the Lord of the Rings movies) plays unorthodox spymaster Sam McCready, Forsyth's answer to George Smiley. McCready generally takes a backseat, however, to the people he's manipulating in each story. This formula enabled the producers to bring in a big guest star for each film, including Elizabeth Hurley, Lauren Bacall, Brian Dennehy, Beau Bridges, Chris Cooper, Phillip Michael Thomas, David Threlfall and Peter Egan. The ones I've watched are solid productions, and I'm not sure why this production isn't better known. It deserves a place beside other solid Forsyth adaptations like The Day of the Jackal (indeed, one of these stories concerns Carlos, the international terrorist the media dubbed "the Jackal" after Forsyth's book!), and especially the Pierce Brosnan and Michael Caine starrer The Fourth Protocol. (Now if only that would get a Region 1 DVD release!) This budget release, priced at just $14.98, will no doubt prove to be one of those nice little cheap gems for spy fans eager for more serious dramas in the serious vein of Le Carre. The set hits stores on February 14, so get it for your spy-loving sweetheart. You can already pre-order it on Amazon.
Posted by Tanner at 2:08 PM

When I watched this when it was forst screened here in the UK, I thought "Meh". I liked the one with Beau Bridges but nothing else.

Anyway I bought the DVD set cheaply last year, not expecting much. My tastes must have changed, because it's remarkably good! True, some stories are better than others (never liked the Bacall one much) but overall, this is worth a purchase if you can get it cheaply enough.

Yeah, the US cover is pretty tacky :-)

I don't remember that series at all but it sounds like it might be worth a purchase at that price.