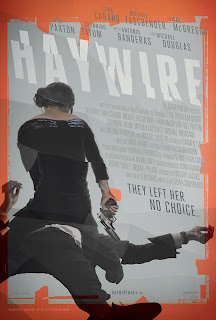 At Sunday’s world premiere “secret screening” of Haywire at the AFI Festival, Steven Soderbergh was introduced as being full of surprises. I admit to being a little surprised when it was first announced—more than two years and 1,000 posts ago—that the Oscar-winning director of such arthouse staples as Sex, Lies and Videotape, Schizopolis and Kafka and glossy, big budget studio movies as Ocean’s 11, The Good German and Erin Brockovtch would be directing an action movie starring Mixed Martial Arts fighter (and former American Gladiator) Gina Carano—something that doesn’t really fit into either of those categories. A little surprised, anyway… but not much, really. After all, he’d already cast a non-actor in a leading role when he tapped porn star Sasha Grey to topline his indie film The Girlfriend Experience. I just figured he wanted to do something different, and that he would make a fairly straightforward martial arts action movie in the vein of the better Van Damme and Seagal flicks of the early 90s. Where he really surprised me was with the resulting film, which is not a straightforward martial arts action movie, but a sort of arthouse action movie that I honestly believe will satisfy both those disparate viewing demographics rather than alienating either one. Personally, I would have been totally fine had Soderbergh wanted to just do his Colombiana (a movie I really liked), but instead he delivers a film that is to Colombiana and Salt (review here) what The Limey is to more standard revenge-oriented noirs. Haywire is both artistic and highly entertaining at once, delivering some of the best fights I’ve ever seen in a spy movie in a distinctive and unexpected visual style more similar to The Informant! or Solaris than Ocean’s 11.

Soderbergh said at the festival Q&A that he was inspired to cast Carano when he saw her fighting on TV and thought she had something, and at the same time he was inspired to make a spy movie because he loved the early Bonds—particularly From Russia With Love. He put the two ideas together and asked his Limey screenwriter Lem Dobbs to fashion a script that was basically an excuse for Carano to “beat her way through the cast,” as the director put it. Dobbs did his job, crafting a story that finds Carano playing Mallory Kane, the top operative for a private security contractor named Kenneth (Ewan McGregor, sporting the worst movie haircut since Javier Bardem in No Country For Old Men). When CIA honcho Michael Douglas and his State Department colleague Antonio Bandaras have assignments they’d rather American agents not be directly associated with, they farm them out to Kenneth’s firm. One such assignment requires Mallory and her team to rescue a Chinese dissident from his captors in Barcelona. Another requires Mallory to jet off to Dublin to reluctantly pose as “eye candy” for a suave freelance British agent named Paul (X-Men: First Class’s Michael Fassbender in what amounts to another convincing filmed audition for the 007 role). When the latter mission goes horribly wrong, Mallory realizes that she was actually set up to take a fall on the former mission, and she embarks to discover who in her own organization or the U.S. government sold her out in Barcelona. This is the appropriately convoluted scenario that enables her to beat her way through the cast. Perhaps I just need a second viewing, but I don’t think the spy plot itself ever totally makes complete sense, but that really doesn’t matter one bit. It serves its purpose, and the audience won’t linger on it because they’ll be too busy taking in the fights and the visuals—and those things are the real point of the film, not the plot. 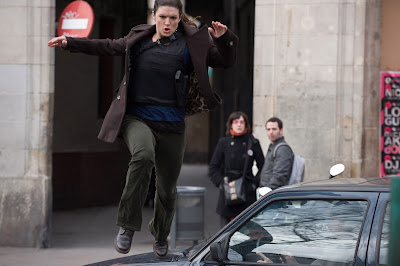 Soderbergh intentionally surrounded Carano with a first-rate cast (which also includes Bill Paxton, Mathieu Kassovitz, Michael Angarano and Channing Tatum) in order to compensate for her own lack of acting experience, but it turns out he needn’t have gone to such measures as she ably holds her own on screen with these heavy-hitters. Soderbergh is clearly aware of her limitations, and he purposely crafts the movie to downplay them while focusing on her undeniable strengths. Besides the obvious martial arts skills, those strengths include good looks, natural charm and the kind of commanding confidence that only comes from being secure in the knowledge that you could easily beat the crap out of anyone else on set. These beatings come with clockwork regularity, and each one is impressive and memorable in its own right.

Like the Bourne movies, Haywire is a film constructed out of action setpieces, and it moves briskly from one to the next. But unlike the Bourne movies, Soderbergh and Dobbs “unstick” them from their surroundings. The fights don’t quite play out on screen in the order that they’re supposed to actually happen, thanks to a narrative device implementing frequent flashbacks for the first half of the film. Furthermore, each setpiece is given its own distinctive look. This makes the setpieces themselves the pieces of the narrative puzzle, challenging viewers (slightly, anyway; this isn’t a movie that requires a whole lot of thinking) to rearrange them in their heads in order to suss out the plot. The device is pretty brilliant in its simplicity. Rather than asking viewers to keep track of intermittent bursts of exposition mixed with action scenes, the action scenes themselves are the exposition. Sliding each distinctive setpiece into its rightful place in our minds, we decode the narrative as the film progresses. This is the arthouse element of Haywire.

Soderbergh successfully deconstructs the action spy formula at the same time as he celebrates it. The slightly out-of-order sequence of events disassociates the action from the narrative by making the action itself the narrative. It forces the viewer to appreciate the art of the action, and there is plenty of art on display as Carano battles with each of these actors in fast fights that play out in real time, without the distracting fast cuts and shaky camera work that make it easy for so many action stars and stunt doubles to cheat these days. (That From Russia With Love influence Soderbergh cited is on full display, with each encounter recalling Sean Connery’s classic close-quarters smack-down with Robert Shaw.) Further disassociating the action from the narrative (or entwining them, depending on how you look at it), Soderbergh lets David Holmes’s propulsive and near wall-to-wall score (sometimes overly intrusive in the dialogue scenes) take over, dialing down the diagetic sound to almost nothing and doing away with dialogue altogether (again playing to the star’s strengths) as Mallory pursues an enemy agent on foot in a breakneck chase through Barcelona. The approach isn’t entirely original as it echoes, to some degree, what Tom Tykwer did in Run Lola Run, but it’s completely successful. 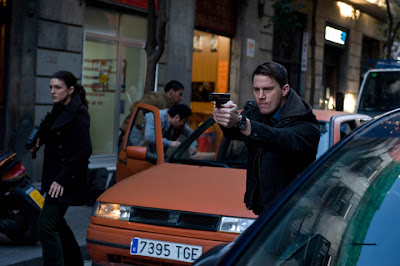 Another fight is memorable because it plays out in a warm, naturally-lit hotel room reminiscent of the lighting in Soderbergh’s low-key spy comedy The Informant! The action is as naturalistic as the lighting, with Carano demonstrating some very impressive moves. Its brutality is contrasted by the luxurious setting and the fact that both combatants are dressed in elegant evening wear. All of these elements add up to create a fight sequence unlike any you’ve ever seen before. Humor and violence are also juxtaposed to create a satisfying shock—but that in itself is hardly groundbreaking.

My favorite scene is also lit naturally, and finds Mallory on the run from squads of heavily-armed S.W.A.T. officers through the streets and alleys and across the rooftops of Dublin. That kind of chase is familiar—and, these days, almost expected—in a spy movie, but I’ve never seen one taking place on a rainy, overcast day that actually looks like a rainy, overcast day before. Furthermore, I haven’t seen Dublin utilized that way as a location, and the city makes a great backdrop for such a chase. All locations are well-used in Haywire, in fact, from Dublin to Barcelona to New Mexico to a beach that serves as a setting for an On Her Majesty's Secret Service-inspired fight in the surf. While the settings smack of having been chosen based on the local tax incentives, they prove that that’s not at all a bad thing for a spy movie!

The end result is a very accessible action flick that augments its truly impressive combat-based thrills with the sort of arthouse narrative and lighting techniques with which Soderbergh imbued his best indie efforts. It’s like Colombiana crossed with Fay Grim, offering something for everyone… but mostly offering a really good time in the theater. The end certainly leaves things open for a sequel (though not in an annoying way, like Salt), and I, for one, would welcome more adventures of Mallory Kane—especially should Steven Soderbergh be convinced to come out of his weird retirement to direct them. (He certainly has incentive to do so, as he struck a unique deal forgoing his usual upfront salary in favor of an ownership stake in the character shared with the studio. It's a rare arrangement, and essentially the same one the Broccoli family enjoys with MGM for James Bond.) Sequel or not, though, I’d say Gina Carano has a promising new career ahead of her.

I'm looking forward to this one, glad you liked it.

Hope I'm working by the time this opens. Speaking of Soderbergh, I'm glad Bradley Cooper dropped out of U.N.C.L.E.. While I like Cooper, I can't see him as Solo.

Hi Double O Section. I have traced a spy and discovered his daughter was a Hollywood film star. I have written a book which has just been published in the USA. I don't know much about how blogging works but if you are interested conatct me Madoc@barkingmad.tv