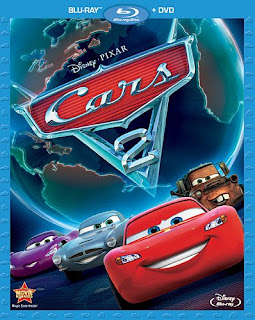 This week sees the release of the latest Michael Caine spy movie on DVD, Blu-ray and an astounding total of five different formats! Following in the long, proud tradition of The Ipcress File, Billion Dollar Brain, The Black Windmill, The Jigsaw Man, The Holcroft Covenant, The Quiet American and countless others comes... Disney/Pixar's Cars 2. I think it was a stroke of genius for Pixar to turn their computer animated sequel to a movie about anthropomorphic cars into a spy movie. Because these movies are aimed squarely at young boys, and what's cooler to young boys than spy cars? It was a certain Aston Martin DB5 and Lotus Esprit that got me hooked on spies for life. Furthermore, since the Cars franchise makes more money off of merchandise than box office, well, what better toy cars are there than toy spy cars? Because it wasn't just those movie cars that got me hooked... it was also their miniature incarnations from Corgi. So I'm solidly sold on the idea of a spy movie about talking cars with one of the greatest spy stars of all time, Sir Michael Caine, playing the lead spy car, Finn McMissile, who seems to be an amalgam of 007's Aston Martin and The Saint's Volvo. But despite my respect for the idea... I have to admit, I still haven't seen the movie. (I do have a toy Finn McMissile, though, displayed right next to my Corgi Bond cars!) I desperately wanted to, but the weekend it came out I was travelling, and then opportunity after opportunity passed me by. It's the biggest movie regret of my summer. But, anyway, now I've got the chance to finally catch up in comfort of my own home! Not only that, but I get to (have to?) choose between those five different configurations. Disney has released Cars 2 on regular DVD, 2-disc Blu-ray/DVD combo in BD packaging, 2-disc Blu-ray/DVD Combo in DVD packaging), 5-Disc DVD/Blu-ray/3D Blu-ray/Digital Copy and the Cars Director's Collection which runs a whopping eleven discs. All the versions come with the theatrical short Toy Story Hawaiian Vacation (which features Timothy Dalton reprising his Toy Story 3 role as Shakespearean hedgehog Mr. Pricklepants as an added spy fan bonus), a director's commentary and an all-new "Cars Toon" short, but if you want more in-depth special features like deleted scenes, making-of documentaries, "Set Explorations from the Different Cities in the Movie," and "Nuts and Bolts: A Sneak Peek of Cars Land World Tour – Interactive Map," then you'll have to buy the 5-disc version with the stupid 3D stuff and digital copy. That runs $49.99 SRP as opposed to $39.99 for the two combo versions and $29.99 for the DVD, but luckily all of them are considerably cheaper than those list prices on Amazon, and there there's only a $2 difference between the 2-disc and the 5-disc configurations. That Director's Collection megaset will set you back $119.00, though Amazon's got it on sale now for $79.99.
Posted by Tanner at 12:11 AM