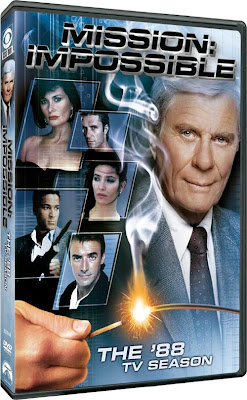 Even if it turns out to be as bad as M:I-2 (which I really don't think it will be), Brad Bird's Mission: Impossible - Ghost Protocol has already accomplished one mission for which I'm eternally grateful: its imminent theatrical release has spurned Paramount to finally put out the first season of the late Eighties incarnation of the Mission: Impossible TV show starring the great Peter Graves! Today, Mission: Impossible - The '88 TV Season (as they're calling this release) arrives just in time to quell the burning need for more Mission: Impossible that's been percolating in my heart since watching the original show's finale. While the Eighties version doesn't hold a candle to the Sixties/Seventies original, this release still holds a certain nostalgic value for me, as it was through the 1988-90 revival that I was first introduced to Jim Phelps and the IMF. Yes, the revival was created solely as a way for ABC to get around a writers' strike by remaking existing scripts from the original show (fortunately they didn't have to stick to episode remakes for very long, as the strike ended), but it's still got that unforgettable Lalo Schifrin theme music (along with surprisingly good incidental music by John E. Davis), it's still got that distinctive burning fuse, and, most importantly... it's still got Peter Graves. And any Mission: Impossible with Peter Graves (even old Peter Graves) is infinitely preferable to Mission: Impossible without Peter Graves. (Oh, don't look so hurt, Steven Hill. My slight is directed more in the direction of Jon Voight and Tom Cruise.)

Graves reprises his role as Jim Phelps, who the studio's copy very accurately describes as "the brilliant and charismatic leader of the Impossible Missions Force." Emerging from retirement to avenge the death of his friend and protege, Phelps puts together a new IMF team including Grant Collier, the son of original IMF agent Barney Collier, played by Phil Morris, the real-life son of original series star Greg Morris. (The elder Morris also turns up as Barney in one episode this season, and another two the following season.) It also includes several rough corollaries for the original team members, like a master of disguise, a tough guy (the term "strongman" wasn't so much in favor by the late Eighties) and a lady. (The lady actually changed part way through the series, and in a fairly spectacular fashion.) Besides Greg Morris, other notable guest stars included Lynda Day George, reprising her role as Casey from the later years of the original series, two-time Bond Girl Maud Adams, and Star Trek: The Next Generation's John de Lancie.

Mission: Impossible - The '88 TV Season, a 5-disc set (in different, slimmer packaging from the original series seasons), retails for just $39.98. It's even less than that, however, on Amazon. (Just $27.99 as of this writing, which can't be beat for a whole season's worth of Jim Phelps & Co.!) Now I just hope we don't have to wait for another Tom Cruise movie to get The '89 TV Season...