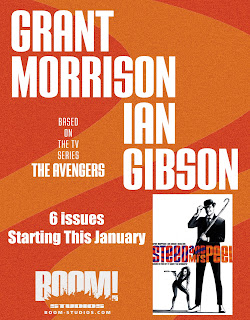 According to the All Pulp blog (via the Avengers International Fan Forum), and confirmed today via a visual press release from Boom! Studios, John Steed and Emma Peel will return to comics in January... sort of. Boom! will release a Steed and Mrs. Peel title (the title The Avengers is already taken on comic shelves, unfortunately), but it won't contain new material. Instead, this is a reprint of the 1990s comic book by Grant Morrison and Ian Gibson originally published by Eclipse Comics. That series ran three 48-page prestige format issues; Boom! will redistribute it into six 24-page issues instead. While I'd greatly prefer new adventures of my favorite TV spies, this is still good news. As I recall, this was a pretty good series, and it deserves to be back in print and readily available. (Presumably Boom! plans a trade paperback collection following the individual issue reprints.) I'll be curious to see what they do for cover art. The artwork pictured in the press release is one of the original covers (I think from issue 1), but obviously with twice as many issues, Boom! will have to come up with at least three new images. Will they repurpose some of Gibson's interior artwork, commission new art from him, or hire new cover artists? Some good new Avengers art might make it worth re-buying this books even for fans who already own them. No doubt the impetus for this reprint is red-hot writer Grant Morrison (currently burning up the shelves with Action Comics in DC's New 52 initiative) rather than Steed and Mrs. Peel themselves, but I sincerely hope that if these books sell well, Boom! will take advantage of their license and offer readers some new adventures of spy fans' favorite Avengers. Fingers crossed on that!
Posted by Tanner at 12:37 PM

Why not just re-release it as a trade?

I agree, that would make more sense. What I'm hoping is that maybe they want to get people used to buying a monthly Avengers comics with Morrison's name on them, then once they're hooked on a monthly basis, continue with a less big-name writer? I hope so, anyway...

I would buy a Tanner-written Avengers book!

I've asked elsewhere to no avail -- there was a back-up story in the original Avengers book, written by Anne Caulfield. Any idea if that will be included as well?