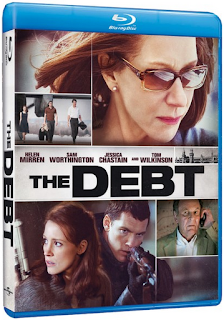 2011 has been a good year for spy movies in theaters in terms of quantity, and not surprisingly, that means a good winter for spy DVDs. Besides the already-announced Colombiana coming out December ___, we can also look forward to The Debt on December 6, Killer Elite (2011) on January 10 and, just in time for the fourth entry in the theatrical franchise, the Mission: Impossible Extreme Blu-ray Trilogy, also on December 6.

The Debt (movie review here), coming to DVD and Blu-ray from Universal, will include the featurettes "A Look Inside The Debt," "Every Secret Has A Price: Helen Mirren In The Debt" and "The Berlin Affair: The Triangle At The Center Of The Debt," as well as an audio commentary with director John Madden and producer Kris Thykier on both formats. Retail is $29.98 for the DVD and $34.98 for the Blu-ray, though naturally both are substantially cheaper at all the usual online vendors. 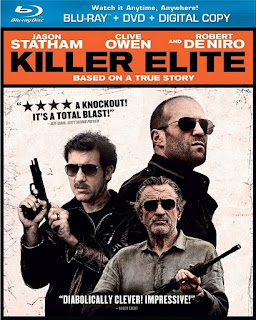 Killer Elite also comes from Uni in dual formats, DVD and DVD/Blu-ray combo. The only real bonus material on both versions is deleted scenes, which is too bad, because I would have liked some featurettes exploring the supposedly factual book on which the movie was based, The Feather Men, and how and why the film deviates from its source. Oh well. The combo version also includes a digital copy and an Ultraviolet copy (oooh!), which is something the studio wants you to be way more excited about than you no doubt are. Despite the scant extras, I'm looking forward to owning this one. It's a movie I'll enjoy watching again. Retail is $29.98 for the DVD and $34.98 for the combo, though that one's actually cheaper to pre-order on Amazon than the standard DVD right now. 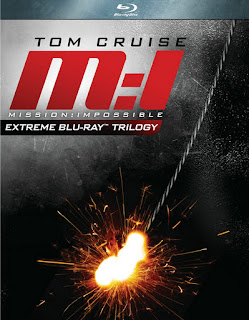 Even the Mission: Impossible "Extreme Trilogy" comes on both Blu-ray and DVD, though most people who want to no doubt already own the DVDs. I'm not really sure what qualifies these three feature films spun out of the classic TV series as "extreme" (dangling, I guess? They're not xXx!), but I do know that one of the reasons why I love Peter Graves is because he was never extreme. (Though some of his shirts and coats were.) Extreme or not, the cover art is actually pretty cool, and this set certainly makes for a good way to accumulate the first three movies at a very reasonable price just in time for the new fourth entry from director Brad Bird. The Mission: Impossibe Extreme Blu-ray Trilogy retails for $39.99 (though it's currently under thirty bucks on Amazon), and the Mission: Impossible Extreme DVD Trilogy is priced at just $26.98 ($19.99 on Amazon right now).
Posted by Tanner at 6:42 PM