The TV Avengers in Comics 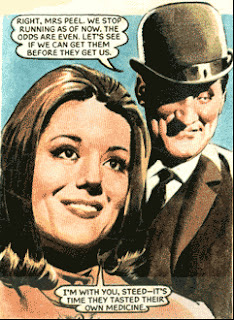 The news earlier this week that The Avengers (Steed and Mrs. Peel, not Thor and Iron Man) would be returning to comics in the form of new reprints from Boom! got me thinking about other Avengers comics past, and I decided it was time to look back at some reviews I wrote before starting this blog. In fact, it was partly writing reviews of Avengers comics for the excellent (if no longer updated) website devoted to that subject, The Avengers Illustrated, that inspired me to start this blog. (That, along with TV reviews I wrote on the old Avengers fan forum. Sadly when that forum died, I lost my reviews of The Persuaders!, which I'd very much like to have as part of this blog archive. Oh well. One day I'll tackle that great series anew.)

Here, beneath webmaster One-Ten's informative recap, you'll find my review (penned under my own name, Matthew Bradford), of the first Avengers comic in the magazine Diana (which wasn't named after Diana Rigg). These Diana strips were notable for fantastic artwork (mostly by Emilio Frejo), even if their kid-oriented plots tended to be lackluster.

Here, at the bottom again, is my review of the second Diana story.

And here you'll find my reviews of the comic stories drawn by the great John Bolton in the 1977 New Avengers Annual. I was a big fan of one of them, "Fangs For the Memories." Better still, you can actually read the whole story itself on the site! Be sure to poke around there for lots of great information on every comic book and comic strip incarnation of The Avengers.

I wonder if Boom!'s reprint rights extend to older material? It would be great to see these old Avengers comics collected someday...
Posted by Tanner at 6:05 PM

Never heard of "Diana." The magazine, that is. Diana Rigg starred in a TV sitcom with that title in the 1970's. Basically, it was a copy of the Mary Tyler Moore show.

Gold Key published an Avengers comic in 1968. The cover had a photo of Patrick MacNee and Diana Rigg, and it looked like the scene was from the episode "A Funny Thing Happened On the Way To the Station." The indicia on the first page listed the title as "The Avengers," but the cover logo said "John Steed Emma Peel." Presumably, to avoid confusion (and/or a trademark dispute) with Marvel Comics. It had two stories, both reprinted from a British magazine, TV Comic.

Yep, and if memory serves, one of those stories in the Gold Key comic was ALSO about vikings! (As is one from DIANA.) Or maybe I'm thinking of one of the UK annuals. But there was definitely at least one more AVENGERS viking strip! And on top of that there was also a story either in TV COMICS or an annual that had John Drake contending with vikings. So apparently a new wave of viking invasions was a major concern for English schoolkids in the 1960s....

For years I searched for bootlegs of the show DIANA, then a few years ago, an episode popped up on YouTube. It was great to see one, but sadly it wasn't the one that Patrick Macnee guest-starred on. THAT I'd really love to track down. You don't have a lead on it, do you?