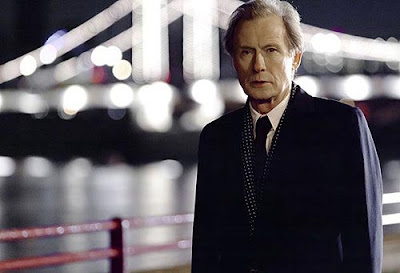 David Hare's all-star BBC spy drama Page Eight (which we first heard about last November and glimpsed some footage of in May) will premiere tonight on American television. (It aired in the UK over the summer.) Page Eight debuts at 9PM Eastern/Pacific on Masterpiece Contemporary. Here's the official synopsis:

With that impressive pedigree, I'm looking forward to this one almost as much as I'm looking forward to Tomas Alfredson's Tinker Tailor Soldier Spy! (Both have gleaned extensive praise in England.) Apparently, it's a good year for serious spies. As usual with Masterpiece Theater material, Page Eight is set to hit DVD just a few days after its premiere, so if you miss it on television tonight you can pick up the DVD  or Blu-ray this Tuesday, November 8. Bill Nighy has already revealed that a sequel may be in the works, something he himself very much hopes to see happen.

Watched this last night and enjoyed the film. Bill Nighy gave a wonderful performance. The supporting cast of Rachel Weisz, Michael Gambon, Judy Davis, and Ralph Fiennes are terrific, working with a literate and a very current political affairs script.

I really enjoyed getting to see again Alice Krige and Marthe Keller in brief appearances in the film. You might remember Marthe from the film Marathon Man.

I thought the performances in this were outstanding, but that the film still left something to be desired. I think the problem lies in its run-time. There was just enough plot and mystery to cover the time we were allotted, but the subject matter, the stakes, the actors involved all warranted much more, in my opinion. I wish there had been at least 30 more minutes of Gambon and Nighy together, and quite a bit more of Fiennes as the PM.

But I'm also willing to accept that perhaps this suffered for me in comparison with the Guinness Smiley flicks, which I've only recently rewatched, and I was expecting something different.

Maybe I hyped the movie a little bit too much, but that's what you get when they make those serious spy movies so scarcely... :-)
Any news about extras on the American dvd?

I enjoyed it quite a lot. Like Armstrong, I would have enjoyed even more, but I didn't think it did a bad job of packing enough story into its relatively brief running time.