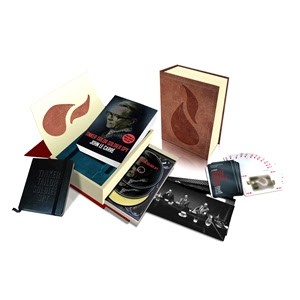 It's not even in theaters yet in America, but in Britain Tomas Alfredson's new theatrical version of Tinker Tailor Soldier Spy is all set for a DVD debut in January. According to Sherlockology, the John le Carré adaptation starring Gary Oldman, Colin Firth, Benedict Cumberbatch and Tom Hardy (among many others) will hit Region 2 DVD (PAL) and Region B Blu-ray on January 30. The Blu-ray's copious special features (which may offer a preview of what Region 1 viewers can eventually expect as well) include an audio commentary with Oldman and Alfredson, a new interview with le Carré (his umpteenth since his so-called "final interview"—not that I'm complaining!), deleted scenes(!), a featurette on Smiley, an "Inside the Circus" featurette, a "Shadow World" featurette, a featurette on the UK premiere, interviews with Firth, Hardy, Alfredson and screenwriter Peter Straughan, a Sky Movies featurette, a photo gallery and trailers. Whew! The DVD, sadly, only contains a fraction of those extras: the commentar, the le Carré interview and the deleted scenes.

UK online retailer Play.com is offering a couple of exclusive variations. There's a "steelbook" DVD/Blu-ray combo, and a really cool "limited edition pack" (pictured above) loaded with further, physical extras! Normally, I'm against stupid trinkets to inflate the cost of DVD sets (like the recent Region 1 It Takes A Thief box), but in this case, I actually think all these items look pretty neat. Best of all, though, is that awesome faux book (complete with a stylized theme reflecting Smiley's lighter, which is integral to the story) that houses them all! Inside the "book," you'll find the DVD and Blu-ray, the original soundtrack CD, le Carré's superb novel upon which the film is based, a bespoke notepad based on the moleskin one used by Smiley in the film, bespoke playing cards an exclusive set of Gary Oldman’s on-set photographs an exclusive film still (okay, that one is dumb) and a certain chess piece significant to the story.
Posted by Tanner at 5:50 PM