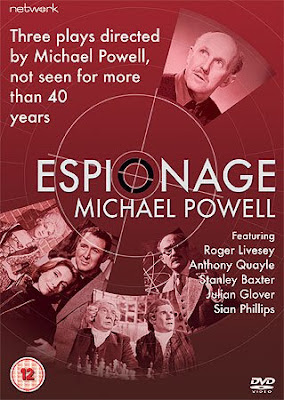 Network DVD will release all three ultra-rare episodes of the 1963 black and white anthology series Espionage directed by the esteemed Michael Powell. I wonder if any of the other twenty-one episodes of the series survive, and if so whether Network has any plans to release them?
Espionage ran for one season and told a completely different spy tale each week. They were set in all different eras, and ranged from the humorous to the depressingly ultra-gritty. The three Powell-directed episodes included on this release cover that whole spectrum. Network's website describes them thusly:
THE FRANTICK REBEL
This is the story of an American girl in London who tries to smuggle English battle secrets to Dr. Benjamin Franklin in Paris, pitting her wits against famed diarist James Boswell and Dr. Samuel Johnson. Starring Roger Livesey, Stanley Baxter and Jill Bennett
NEVER TURN YOUR BACK ON A FRIEND
War forces a harsh test of comradeship on men of different nationalities whose adventures together as a team of saboteurs have cemented a deep friendship. Starring George Voskovec, Donald Madden, Mark Eden and Julian Glover
A FREE AGENT
The story of the bitter-sweet romance of a British spy who marries a lovely Russian agent. Can the two governments concerned allow such a marriage?Starring Anthony Quayle and Sian Phillips
This is very exciting news. I've long wanted to see this series, and while I'd rather have the whole thing, I'll certainly settle for a taste. (And Powell's involvement makes this a particularly enticing taste!) I can't give Network enough praise for what they're doing. They keep digging up long-overlooked programs and music, many of them spyish in nature, and giving them first rate DVD releases. Visit their website for more info.
Espionage is, of course, a Region 2 PAL release, so North Americans will require a multi-region DVD player to view the disc.
Posted by Tanner at 5:32 PM