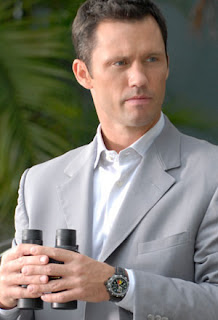 So Michael Weston is back! And how’s his return? Well, the season premiere cheats a little on last year’s cliffhanger. It looked like he was on his way well out of Miami and headed for some serious answers as to the burning question of who burned him, but now we discover that that elaborate setup merely led to another case–and more questions. While that’s a little bit frustrating, the truth of the matter is that audiences don’t really want a radical change in the series, so the writers are certainly better off in devising a way for him to stay in Miami. And the new premise (which finds Michael reluctantly working for the unknown forces who have been pulling the strings all along) should at least alleviate last season’s over-reliance on friends of his mother who get into trouble and then need help. But Matt Nix & Co. are going to have to give us some answers eventually as to the whole “burn” issue, and then find a way to make those answers mesh with keeping Michael in Miami!

Besides the cheat, the Season Two opener is a great episode. Solid writing, good action and an expanded role for Bruce Campbell. What more could you ask for? Michael executes another exciting, Mission: Impossible-style break-in, and an equally exciting–if unplanned–breakout. There are some wonderful comic moments, such as Sam (Campbell) teaching the client to play cards rather loudly and distractingly as Michael tries to plan his heist, and Fiona’s priceless expression as she shows off her expert marksmanship by missing Michael by mere inches.

I found Michael’s British accent to be a little dodgy, but maybe that’s a throwback to Fiona’s disappearing Irish accent in last year’s pilot? If so, does that mean next year it’s Bruce’s turn for an accent? (Maybe Scottish?) Hope so! Anyway, if the pilot’s anything to judge by, it looks like we can expect the same high quality and exceptional entertainment value out of the second season as we got from the first.
Posted by Tanner at 5:21 PM

I really enjoyed last night's episode. Dodgy British accent? I heard an Australian accent and I thought it was pretty good. Much better than his NYC accent from last season. I can't wait for the next episode!

It wasn't an NYC accent. It was an authentic Massachusetts north shore accent.

I really liked the episode, but I have the feeling that I may get a little impatient with the show if I don't see Michael getting a little of his own back on the people who burned him.

I thought it was supposed to be Australian or maybe South African at first, but then they said he was British. That's where the dodgy comes in!

I think we will see Michael unravelling this conspiracy and getting back at these people... I just hope they don't draw it out too long.

Not the best episode of the series and definitely not the best way to start the Sophomore season.

I thought they said he had dealings with a British company as part of his cover. Maybe none of us heard it right. I definitely heard an Aussie accent, which was ok technically, but still felt put-on. It does amuse me when JD's Massachusetts sneaks back in, though.