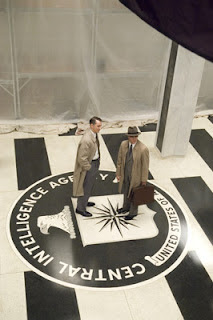 Robert De Niro spoke this past weekend at the Karlovy Vary International Film Festival in the Czech Republic and revealed that he still harbors hopes for following up 2006's The Good Shepherd, even though that film failed to light up the box office. Variety reports that "De Niro said he would like to make two sequels to CIA Cold War drama The Good Shepherd -- one bringing the action forward from 1961 to 1989, the other following its hero, Edward Wilson (Matt Damon), up to the present day. Although he is not working on research for the concluding parts of the hoped-for trilogy, De Niro said being in central Europe offered a good opportunity to begin thinking about the material."
It was always the intention of director/co-star De Niro and writer Eric Roth to make a trilogy of films tracing the history of the CIA, following Matt Damon's James Jesus Angleton-inspired character from the inception of the Agency all the way up to the present day. Personally, I really hope De Niro is able to realize his dream. I enjoyed every minute of The Good Shepherd, despite the film's many flaws. And I still believe that most of those flaws would be ironed out by a longer cut, and hope that we see that cut one day on DVD. (Roth said the first attempt clocked in at over four hours.)
Read my initial review of The Good Shepherd here.
Read my re-appraisal of The Good Shepherd on DVD here.
Posted by Tanner at 1:35 PM