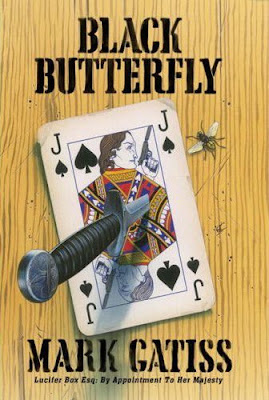 Wow. Fantastic! LuciferBox.com points the way today to newly-revealed cover art on Amazon.co.uk for Mark Gatiss' latest Lucifer Box novel, Black Butterfly. As previously revealed, the third Box novel (following The Vesuvius Club and the phenomenal Devil In Amber) advances Box (who started his career as an Edwardian secret agent) into the 1950s and into Ian Fleming territory. The Vesuvius Club parodied/homaged Conan-Doyle in the early 20th Century; The Devil In Amber lovingly satirized John Buchan and Dennis Wheatley with a 1930s setting. Now a much older (but probably no less vain) Box will find himself in more Bondian situations, and I simply cannot wait!

This cover, of course, appropriately echoes the classic Richard Chopping covers that graced most of the British first editions of Fleming's books from From Russia With Love onwards. (It most directly evokes Thunderball and The Spy Who Loved Me.) This is exactly the sort of thing I was hoping for from the Devil May Care cover! The official synopsis also drops some cool Bond references:

LUCIFER BOX. He's tall, he's dark and, like the shark, he looks for trouble. Or so he wishes. For, with Queen Elizabeth newly established on her throne, the now elderly secret agent is reaching the end of his scandalous career. Despite his fast-approaching retirement, queer events leave Box unable to resist investigating one last case...Why have pillars of the Establishment started dying in bizarrely reckless accidents? Who are the deadly pay-masters of enigmatic assassin Kingdom Kum? And who or what is the mysterious Black Butterfly? From the seedy streets of Soho to the souks of Istanbul and the sun-drenched shores of Jamaica, Box must use his artistic licence to kill and eventually confront an enemy with its roots in his own notorious past. Can Lucifer Box save the day before the dying of the light?

Black Butterfly comes out November 3.
Read my review of The Devil In Amber here.
Posted by Tanner at 11:22 AM

Pretty well done. Even throws in the fly.

Yeah, they got all the elements! I love it. Not a direct mirror of any single Chopping cover, but instead (better!) a really nice pastiche/tribute to all of them. My only tiny little quibble is that the wood should be just a shade lighter, but I'm not going to get hung up about that. You're right; the fly is a great touch!