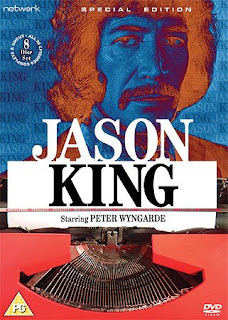 Jason King Comes To England
Following a bare-bones release in the U.S. (which, frankly, we were lucky to get, considering how obscure the show is here!) from Image and a feature-laden one in Australia from Umbrella, Jason King is finally coming home to Great Britain, courtesy of (who else?) Network. While not containing as many extras as Umbrella's version (surprisingly no commentaries!), Network's Jason King: The Complete Series does offer, naturally (and to the frustration of Peter Wyngarde completists, I'm sure), all-new bonus material. The main attraction here is "Wanna Watch a Television Series? Chapter Two: Fish out of Water" - the last part of an exclusive two-part documentary on Department S and Jason King, narrated by Peter Bowles and featuring contributions from Cyril Frankel, Kate O’Mara and Burt Kwouk. Part 1 appeared on Network's Department S set. Other features of note include a suite of Laurie Johnson’s incidental music, with accompanying image gallery, an interview with Peter Wyngarde on Russell Harty’s show in 1973 (cool!), PDF Material (which, on Network releases, is usually quite good, with scripts and annuals and the like), "The Crossfire" - a play from 1967 featuring Wyngarde (intriguing!) and a commemorative booklet.
Jason King: The Complete Series is out today, July 2, and retails for £59.99. The inimitable Peter Wyngarde stars, and guest stars include Julian Glover, John Le Mesurier, Patrick Mower, Ronald Lacey and dozens of beautiful women like Ingrid Pitt, Alexandra Bastedo, Yutte Stensgaard, Stephanie Beacham and the delectable Madeline Smith. 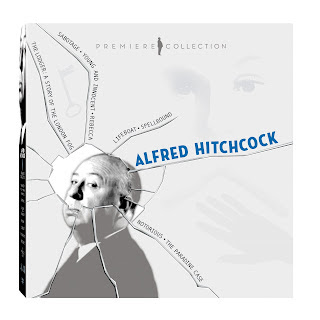 Alfred Hitchcock: The Ultimate Spymaster
Great news for Hitchcock fans! Fox and MGM have announced the Alfred Hitchcock Premiere Collection, the perfect companion piece to Universal's Masterpiece Collection and Warner's Signature Collection. The Premiere Collection includes new versions (with different extras) of the long out-of-print (and very pricey) Criterion titles Notorious, Spellbound and Rebecca, as well as The Lodger, The Paradine Case, Young and Innocent, Sabotage and Lifeboat. Complementing these fantastic titles is a slew of new extras, including (according to the press release) "audio commentaries, featurettes, screen tests, still galleries, vintage radio interviews, an AFI Tribute to Hitchcock, a 32-page notebook with trivia, production notes and more about the legendary director and more." Every film has at least one commentary track, as well as various featurettes and, in most cases, radio plays. Pat Hitchcock and Peter Bogdanovich seem less ubiquitous than they are on the Universal and Warner sets, but Bogdanovich does pop up in the form of excerpts from his lengthy audio interviews with the master.
As for the specific spy movies in this set, Sabotage (adapted from Joseph Conrad's The Secret Agent) includes the thinnest extras with a commentary with film historian Leonard Leff, an audio interview between Bogdanovich and Hitchcock, a restoration comparison and still gallery. Notorious has two commentaries by film historians (one with Rick Jewell and the other with Drew Casper), an isolated music and effects track, "The Ultimate Romance: The Making of Notorious" featurette, "Alfred Hitchcock: The Ultimate Spymaster" featurette, an AFI Tribute to Hitchcock, a 1948 radio play starring Joseph Cotton and Ingrid Bergman, another Bogdanovich audio interview, a second audio interview with François Truffaut interviewing Hitch, a restoration comparison, a still gallery and a four page booklet. Whew! Most of the other discs are comparable to that, extra-wise. Lifeboat seems to offer the same features as Fox's recent stand-alone Special Edition.
Wow, I can't wait for this!
The Man From U.N.C.L.E. Comes To Stores
TVShowsOnDVD reports that The Man From U.N.C.L.E. is coming to stores much faster than Get Smart did. Both titles started out available exclusively from TimeLife, giving Warner Home Video and its subsidiary HBO Home Entertainment, respectively, the right to distribute after a year of exclusivity. HBO took its time with Get Smart, finally announcing watered down seasons for stores starting this August. U.N.C.L.E. fans are luckier: Warner is releasing the exact same set (and it is a fabulous set!), complete with copious extras and even that neat attache case packaging, on October 21. Retail for the complete series (five seasons) is $199.92, fifty bucks less than TimeLife was offering it for. And, as TVShowsOnDVD points out, online retailers like Amazon and DeepDiscount are likely to offer it much, much cheaper than that even.
More Chan From Fox 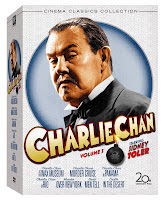 Fox has announced their final collection of Charlie Chan films, due out on September 16. The good news is that they'll stuff all seven remaining Sidney Toler Fox Chan films (he went on to make more at MGM, which are already available, and Monogram, which aren't) into the four-disc Charlie Chan Collection - Volume 5; the bad news is that there won't be room for as many fantastic special features as the last couple of volumes contained. There will, however, be one half-hour documentary that sounds promising: "The Era of Chan," which the press release says will celebrate the legacy of the Chan series at Fox and focus on the series' final seven films and the talents behind them, examining the series' success and how the Chan character rose to the status of icon, influencing many screen detectives to come. Additionally, all titles included in the collection feature original theatrical trailers as well as still and advertising galleries.
Toler's wartime Chan movies feature frequent espionage plots, and this set's Charlie Chan in Panama is one of the most exciting Chan spy flicks. Also included are Dead Men Tell (set aboard a treasure-hunting ship), Charlie Chan in Rio, Charlie Chan at the Wax Museum, Charlie Chan's Murder Cruise, Murder Over New York and Castle In the Desert.
Posted by Tanner at 11:18 AM

A warning to prospective buyers of the MAN FROM U.N.C.L.E. set. Never lift the attache case packaging by the handle. Mine gave way after being picked up maybe six times. For $250, I expected something at least as sturdy as the Bava book.