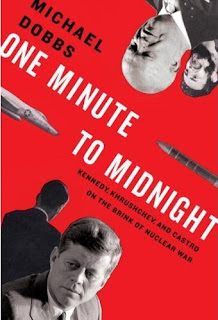 "Fox 2000 has acquired screen rights to One Minute to Midnight: Kennedy, Khrushchev and Castro on the Brink of Nuclear War, according to Variety. The film will focus on U2 spy pilot Charles Maultsby who drifted off course into Soviet airspace and nearly provoked WWIII. "Buried in [Michael Dobbs']book is this white-knuckle four-hour flight that frames out the most dangerous moment in the history of the world," says producer John Davis. The incident provides a fresh point of view on the tensest moment of the Cold War.
Tehran
Variety reports that Universal Pictures and Imagine Entertainment have picked up a spec script called Tehran by Richard Regen. According to the trade, "the drama revolves around an American professor who is contracted by the federal government to observe tensions in pre-coup Tehran in 1977. He realizes that Iran is rife with political danger and his viewpoint is backed up when he falls in love with an Iranian girl whose brother is a member of the secret police." 1977 Tehran is a great, underused backdrop for tense spy drama, so this one sounds pretty exciting. Regen is no stranger to espionage, having created the 2000 UPN series Secret Agent Man, a modern-day take on The Man From U.N.C.L.E. concept that featured the secret agent duo Monk and Holiday, stylish agents of P.O.I.S.E. Somehow I missed that one. Cancelled after twelve episodes, it sadly aired just a few years before it became commonplace for failed series to automatically turn up on DVD. Too bad, because it sounds kind of awesome! 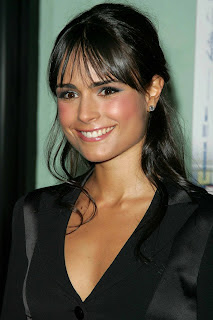 Brewster Chucked
EW's Michael Ausiello reports that the ethereal Jordanna Brewster (pictured) will appear on a multi-episode arc of Chuck this fall. Brewster will play Jill, the infamous college girlfriend who came between Chuck and his future spy roommate, Bryce Larkin, back at Stamford. After starring in the cult hit D.E.B.S., Jordanna Brewster had another near-miss with the spy genre in 2007 when she took on Angelina Jolie's role for a TV version of Mr. & Mrs. Smith. Sadly, the pilot never went to series. It was a show I was anxiously looking forward to. But I'll be glad to see her pop up on Chuck!
Cap'n Pierce
Ahoy there! The same week he's shaking up his spy-guy image by singing and dancing to Abba songs in Mama Mia!, Pierce Brosnan is in the news again. Variety reports that the former Bond will play a swashbuckling sea captain in director Danny Devito's movie of Avi's classic young adult novel The Confessions of Charlotte Doyle. They describe the character as "charismatic but ruthless." Sounds perfect for Pierce! Morgan Freeman plays the ship's chef and Atonement's Saoirse Ronan plays the title character in the 1830s-set adventure.
Posted by Tanner at 3:08 PM