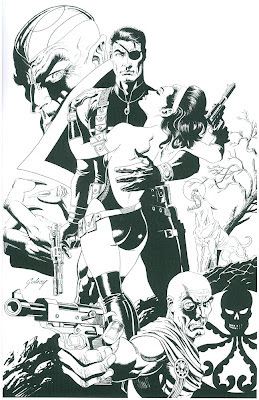 Comics' quintessential spy artist, Paul Gulacy, will be drawing comics' quintessential spy, Nick Fury, for (amazingly!) the first time ever sequentially. (He's done a few sketches and pin-ups, like the one pictured, over the years.) The catch is, it won't be Steranko's superspy version of Fury, Agent of S.H.I.E.L.D., but the WWII version... SERGEANT Fury. And his Howling Commandos. And Captain America. I'm bummed that Gulacy's first stab at the character will be at his soldier incarnation rather than his spy one, but the story (penned - I think he said - by Mark Guggenheim) sounds pretty damn cool nonetheless and I'm sure the artist will knock it out of the park. In the final days of WWII, Cap and the Howlers find themselves stranded in the snowswept German Alps, along with Red Skull and a castle full of Nazis. Soon enough, the bullets start to fly.
Gulacy didn't rule out drawing the spy version of Fury at some point in the future, though, and David Spurlock, moderator on Gulacy's Comic-Con panel, interjected that were such a story to happen, he'd get Steranko to supply the covers... and maybe even the inks! Fans pressed the artist further on this entirely hypothetical project (which seemed to get everyone's mouth watering, as it bloody well should), and he revealed that he'd like to see it written by Guggenheim, Brian Michael Bendis, or his James Bond: Serpent's Tooth collaborator Doug Moench.
Posted by Tanner at 1:26 AM