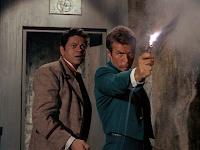 Well, CBS/Paramount may have wrapped up the series with their recent release of The Wild Wild West - The Fourth Season, but they're still milking the franchise. TVShowsOnDVD reports that they'll release The Wild Wild West: The Complete Series on November 4. The good news is that, in addition to all four previously released seasons, this release will also include the two much-hoped-for TV reunion movies, Wild Wild West Revisited and More Wild Wild West on an exclusive bonus disc! The bad news is that there are no plans to release this disc on its own. So if you've already bought all four seasons (which most fans probably have) and you want to have everything (as most do, I'd imagine), Paramount's got you in a stranglehold. Annoying, but at least those movies are coming out! Package Artwork isn't available yet, but I sure hope it's cool enough to justify that forced re-buying...
Posted by Tanner at 11:31 AM