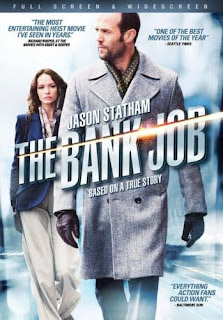 Today sees the release of Lionsgate's The Bank Job on DVD. The Roger Donaldson films stars Jason Statham and Saffron Burroughs and tells the fascinating true story (or as true as the writers can guess, since many of the facts have never been released) of a 1970 London bank robbery that was hushed up by the government. The movie postulates a credible conspiracy involving crooked cops, local gangsters, black power, MI5, and even the Royal Family. It's not just a heist movie. The heist, while interesting, is over halfway through the film. Then things really get going with the cover-up and conspiracy angles of what's really a spy movie. The Bank Job is available in single-disc and double-disc (marked up for that useless "digital copy," but also including extra bonus features) editions.
Read my review of The Bank Job here.
Posted by Tanner at 10:48 AM

I've really been wanting to see this one.