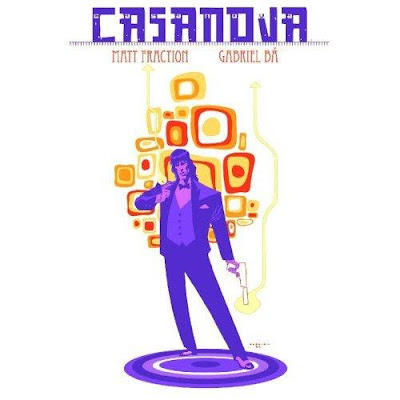 If Jim Steranko's seminal Sixties run on Nick Fury, Agent of S.H.I.E.L.D. is colloquially labeled "James Bond on acid" (which it is--month after month Steranko came up with new reasons for Fury or his enemies to hallucinate so he could create brilliant, mind-melting psychedelic collages; my favorite was Fury's hallucinogenic hand grenades), then Matt Fraction's superspy comic Casanova has to be Nick Fury on acid. Fraction's warped take on the S.H.I.E.L.D./Bond mythos (and Gabriel Ba's deliciously trippy art) is so convolutedly meta that I wasn't really able to make heads or tails of it, and dropped it after a few issues despite my wholehearted appreciation for Fraction's desire to deconstruct and repackage the best of Sixties popular spy culture. But the book is a hit, so other readers must have more patience with it than I did, and perhaps I was too hasty in dismissing it. And now... it's gonna be a movie.
Newsarama links to an EW piece reporting that Fraction has signed a deal with producer Rick Alexander to develop Casanova into what Alexander promises will be a "mega-budget, effects-intensive action spectacular." The producer sees it as "a Bond-type franchise," one-upping the changing faces of 007 by casting a different actor as Casanova in each installment. Newsarama says a major A-list star is already mulling the first film. The plan is to attach an actor and director before hiring a screenwriter.
Posted by Tanner at 5:40 PM