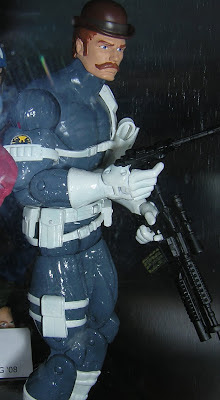 I previously reported that Hasbro had a new Nick Fury figure on the way with alternate heads to turn him into multiple S.H.I.E.L.D. agents, but had no information on specifics. Turns out there's a whole slew of S.H.I.E.L.D. agents on the way! And they're not just alternate Nick Fury heads. On display at Comic-Con were a fantastic Dum Dum Dugan figure (left), and a great Sharon Carter (aka Agent 13, and recently Captain America's girlfriend). I'll post two pictures of Sharon, because thanks to the glass of the display case and my flash, neither one came out great, but together they give a good idea of how cool she looks. 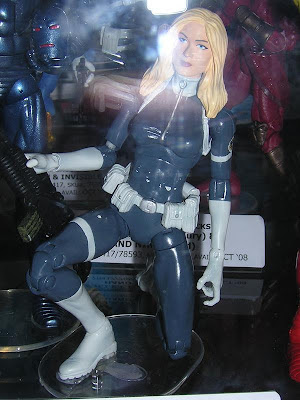 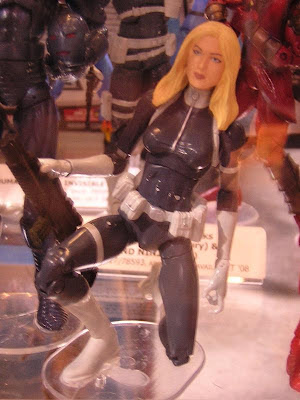 Then we have the whole assortment of S.H.I.E.L.D. personnell, including a random agent with changeable heads (helmet and goggles, or plain face), Iron Man (current Director of S.H.I.E.L.D. in the comics) in his S.H.I.E.L.D. garb, Fury (in the background), Sharon, some superheroes, and Maria Hill. You can also see the Ultimate Nick Fury figure in the very back. Unfortunately, my picture of him in his packaging didn't come out at all, but we've already seen good pictures of Ultimate Fury. 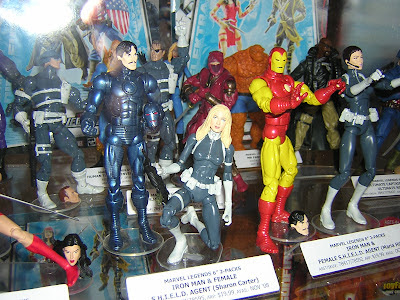 Lastly, we've got a clearer view of the new Nick Fury sculpt. I still don't like it as much as the old ToyBiz figure, but he does look much better in person. I'm going to be buying a lot of Marvel Legends figures when these all hit shelves this fall, that's for sure! 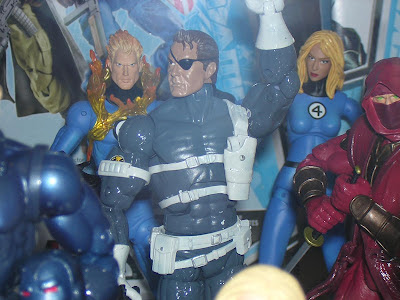