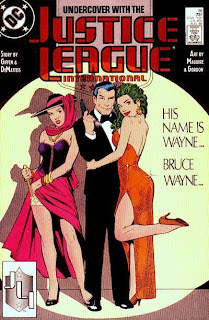 His Name Is Wayne, Bruce Wayne: James Bond And The Dark Knight

There’s a long association of Batman and spies, especially in the caped crusader comics drawn by Paul Gulacy. Christopher Nolan seems to share that viewpoint; he’s said as much in countless interviews, and it certainly shows in his films. I felt his Batman Begins owed a lot to the Roger Moore Bond movies (in scope, not tone), and Nolan turned Wayne Enterprises CEO Lucius Fox into Batman’s Q. (Clearly, he felt a need to answer Jack Nicholson’s famous rhetorical question, "Where does he get those wonderful toys?")

Nolan’s latest Bat opus, The Dark Knight, continues this trend. It’s not only the best Batman film ever, but chock full of spy references! For starters, there’s an even more direct riff on the classic Q scenes ("Try reading the instruction manual first," snaps Fox at an overcurious Bruce Wayne), which is nice to see somewhere, since EON seem to have abandoned that crucial element from the current cinematic 007. There are several blatant Bond nods, including Batman’s method of exfiltration when he travels overseas for more exotic (and Bond-like) adventure outside of Gotham City. Fox says it’s borrowed from the CIA, but astute viewers will know it’s really borrowed from Thunderball! Largo’s yacht from the same movie would seem to provide inspiration for a cool new Bat gadget, as well.
Garth at Dark Horizons recently asked Nolan, "You've said you're a big fan of James Bond. Did you purposely put in some of more of that secret agent stuff into this film because of that?" and the director gave an interesting reply: "Well, we certainly did in both films. We started it in Batman Begins, and I think the Bond films are a big influence tonally. In terms of trying to explain to the studio, you know, if you look at the early Bond films you've got extraordinary things happening. But there's an overall tone you can buy into as a regular action movie. You're not completely stepping outside the bounds of reality."
Beyond Bond, there are other spy themes running through The Dark Knight. Alfred’s (Michael Caine) mysterious past is alluded to obliquely, although the reference seems more likely to be to army days than those at MI6. Finally, the movie addresses very contemporary issues of personal privacy, and to what ends Batman should go in spying on the public in order to protect them. Where are the limits? It’s a key theme of Nolan’s film, and one very applicable to the domestic spy bills recently voted on in Congress. While it only makes sense to comment here on the spy aspects of the film, I will say that The Dark Knight actually lives up to all its considerable hype. It’s a bona fide masterpiece, and even manages to make vast improvements on its not unimpressive predecessor.

Christopher Nolan appears to be a real Bond aficionado, and I’d love to see what he did with an actual Daniel Craig Bond film! (When asked if he'd like to helm one, the director is quick to reply, "I'd love to!" Likewise, according to MI6, Dark Knight co-star Gary Oldman has nominated himself to be the new Q.) In the meantime, I’m looking forward to Nolan’s take on The Prisoner more than ever, and I really hope he manages to squeeze it in next, between Batfilms. (According to the same Dark Horizons interview, he hasn't decided what film to tackle next.)
Posted by Tanner at 12:03 AM

I'm very excited for The Dark Knight - it looks rather extraordinary. And yes, let The Prisoner be his next project! I'd even take Christian Bale as number 6!

I can't wait to see The Dark Knight. It was sold out around here this weekend. It looks amazing. There does seem to be many similarities between Batman and Bond. I always loved the gadgets. That's one of the things I miss in the Craig 007 movies. I wish they would make their return. I would love to see Nolan do a Bond film. I wouldn't have any problems with Oldman as Q. I do hope he definitely gets the ball rolling with The Prisoner. Hey, I would take Bale as Number 6 myself.